Ahead of Biden visit to Israel, Netanyahu to meet with Mitchell again.

By KHALED ABU TOAMEH, HERB KEINON
MARCH 8, 2010 00:57
mahmoud abbas 311
(photo credit: AP)
Advertisement
After months of refusing to hold talks with Israel unless it declared a complete halt to construction in the settlements and east Jerusalem, the Palestinian Authority on Sunday decided to give the US a chance to conduct indirect negotiations between Palestinians and Israelis.Soon after the Palestinian leadership’s decision, Prime Minister Binyamin Netanyahu met in his Jerusalem office for some two hours with US Middle East envoy George Mitchell, who arrived on Saturday evening.The two men are scheduled to meet again on Monday morning, before Mitchell travels to Ramallah for talks with the PA’s President Mahmoud Abbas, who is expected to formally inform the US of its agreement to enter into “proximity talks” for a period of four months.That announcement is expected to coincide with the arrival of US Vice President Joe Biden on Monday afternoon. Biden is scheduled to hold a day of talks in Jerusalem on Tuesday with Israeli leaders, and then go to Ramallah and Bethlehem on Wednesday for talks with Abbas and other PA officials on the indirect negotiations.Related: Analysis: Not all visits by US vice presidents are significant, but this one isMitchell is expected to act as the intermediary in the proximity talks, shuttling between Netanyahu’s office in Jerusalem and Abbas’s in Ramallah.The PA stressed that the talks must focus first on the issues of borders and security, and that they would continue only if the two sides reached agreement that the pre-1967 lines would constitute the basis for a two-state solution.Israeli officials continued to reject any conditions to the negotiations, with one source saying, “If the Palestinians are looking for excuses to break off the talks, they can always find them. What is important for us now is to start the talks.”PA officials in Ramallah said the decision to resume the talks with Israel was the result of immense pressure exerted by the US administration and some EU countries on the PA leadership in recent months. 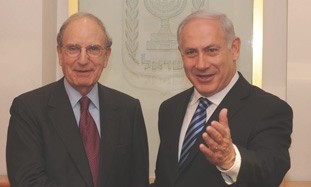 The officials said that Arab backing for the PA leadership’s decision to resume indirect negotiations was another factor that prompted the decision.For the past year, Abbas has refused to return to the negotiating table until Israel halted all construction not only in the West Bank settlements, but also in the eastern part of Jerusalem, and accepted the Palestinians’ demand for a state on all the West Bank and Gaza territories captured in the Six Day War.Yasser Abed Rabbo, a senior PLO official and close aide to Abbas, said the decision to resume the negotiations did not mean that the PA had abandoned its preconditions.“We will continue to demand a complete cessation of settlement construction,” Abed Rabbo said after a meeting of the PLO Executive Committee in Ramallah. “We will insist that all settlement construction be halted, including in Jerusalem, and that Israel stop confiscating land, demolishing houses and changing and assaulting the national and religious heritage of Hebron, Jerusalem and Bethlehem.”Abed Rabbo made it clear that the Palestinians would not hesitate to withdraw from the negotiations once again if Israel did not comply with their demands.The PLO committee meeting was headed by Abbas, who urged participants to support his decision to resume the peace talks.A committee member quoted Abbas as saying that the Americans and Europeans, as well as some Arab governments, had put heavy pressure on him to return to the negotiating table.The member noted that several PLO officials who attended the meeting were not happy about the decision to resume the peace talks.Abed Rabbo confirmed that “some” PLO officials had expressed “reservations” about the decision, while others cautioned that it could undermine the PA’s credibility among Palestinians.The Palestinian leadership, he added, wanted to see Mitchell succeed in his efforts to persuade the two sides to resume the peace talks.“The Palestinian leadership will coordinate all its moves with the friendly countries, to confront Israeli assaults on our holy Christian and Islamic sites and on Palestinian lands,” Abed Rabbo said. “The Palestinian people has every right to resist these measures in accordance with international law.”He also called on the Quartet – the US, UN, Russia and the EU – to be actively involved in the Middle East peace efforts and to “follow up” on the indirect negotiations between Israel and the Palestinians. The Quartet is scheduled to meet later this month in Moscow.“The negotiations would be pointless unless the international community takes real steps to halt Israeli violations,” Abed Rabbo warned. “Despite the many reservations among the Palestinian leadership, we remain united in our belief that Israel alone bears the responsibility for the failure of the peace process.”He said Abbas and Mitchell would discuss during their meeting in Ramallah on Monday “mechanisms” for the resumption of the indirect negotiations.Asked if the PA was seeking assurances from the US, Nabil Abu Rudaineh, a spokesman for Abbas, said: “We don’t want assurances. We want clear answers. Is Israel prepared for peace and can the US administration continue with the peace process in light of Israeli intransigence?”The PA’s decision to launch indirect negotiations drew strong condemnations from Hamas and other radical groups in the West Bank and the Gaza Strip.“This decision will have serious repercussions for the Palestinians and their cause,” said Fawzi Barhoum, a Hamas spokesman in the Gaza Strip. “This decision will help Israel in ending the state of isolation it has been in because of its war crimes against the Palestinians in the Gaza Strip.”Another Hamas spokesman, Sami Abu Zuhri, condemned the decision to resume the negotiations as a “crime” against the Palestinians.“We consider these negotiations, which will take place in the wake of Israeli escalation against our people and holy sites, a national crime,” he said. “Anyone who negotiates with the occupation is a criminal against our people.”An Israeli official said that the Palestinian decision to give the indirect talks four months was not taken at random, and was designed to expire shortly before the termination of Netanyahu’s 10-month settlement housing moratorium, at the end of August. This will now be used as a lever to get Netanyahu to extend and widen the moratorium, the official predicted.Meanwhile, Defense Minister Ehud Barak, who met with Mitchell on Saturday night, said at a conference in Herzliya for International Women’s Day that he hoped the proximity talks would enable direct negotiations “on all the core issues.”A peace treaty with the Palestinians, Barak said, “has eluded the country repeatedly for 20 years. I feel today, more than ever, the supreme responsibility of the leadership to ensure that this opportunity is not lost.”Barak said the government will have to make “difficult decisions,” and in a clear reference to Kadima head Tzipi Livni, said that all the country’s political parties needed to give the government the backing to make those decisions.Livni, speaking at the same event, begrudgingly praised Netanyahu, saying that while he did not want to say the words “two-state solution” before last year’s elections, he was saying them now, albeit only after he was pushed into a corner and pressured. Nevertheless, Livni said, this was “positive.”“The principle of a two-state solution is the only one that willpreserve Israel as a Jewish and democratic state,” she said. “Toachieve that vision it is not enough to be dragged into proximity talkswith the Americans – which I welcome. We must make a decision.”
Advertisement
Subscribe for our daily newsletter