Another video showed the sisters saying they had married two Muslim men and converted to Islam of their own free will. 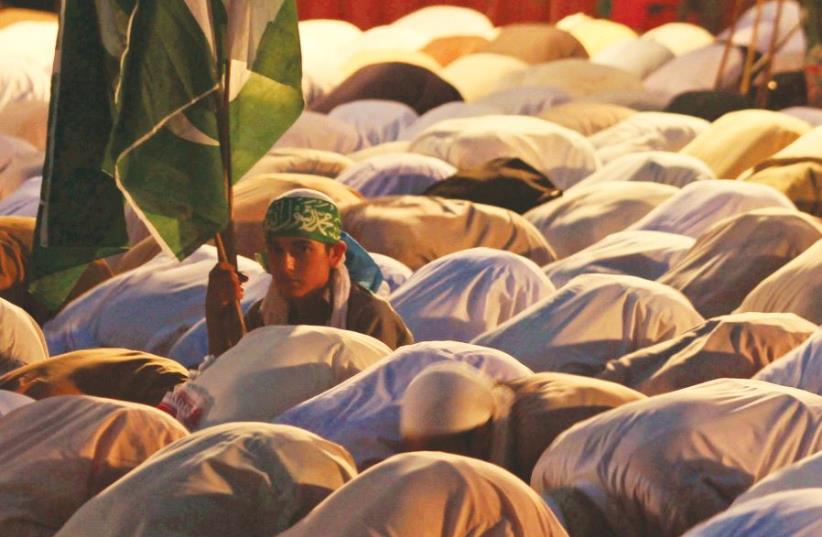 A SUPPORTER of Jamaat-e-Islami, a Pakistani religion-based political party, holds the national flag while sitting among others offering evening prayers in Islamabad, Pakistan.
(photo credit: REUTERS)
Advertisement
Two Pakistani Hindu sisters whose parents said they were kidnapped and forced to change their religion to marry Muslims had converted voluntarily, a court ruled on Thursday, in a case that has attracted attention in Hindu-majority India.
The court had ordered the government to take custody of the sisters, both teenagers, in late March after accusations spread on social media that they had been forced to convert to Islam.
Another video showed the sisters saying they had married two Muslim men and converted to Islam of their own free will.
The court said the two were adult enough to make their own decisions and that they were not forced to convert.
Police say the teenagers left their home in Pakistan's southern province of Sindh on March 20 to be married in Punjab province, where the law does not bar marriages of those younger than 18, unlike Sindh.
The police detained ten people in the case and registered a formal case of kidnapping and robbery on complaints from the girls' parents.
The incident prompted a rare public intervention by a top Indian official in its neighbor's domestic affairs, when Foreign Minister Sushma Swaraj said on Twitter she had asked India's ambassador in Pakistan for a report.
Pakistan was "totally behind the girls," Information Minister Fawad Chaudhry said on social media in response to Swaraj's message, but asked India to look after its own minority Muslims.