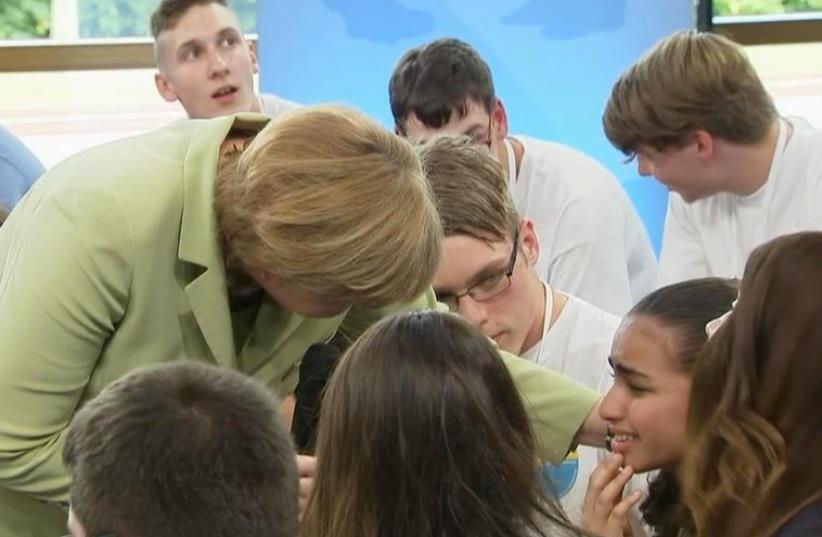 German Chancellor Angela Merkel listens to a Palestinian refugee girl who gave her name as Reem during a forum discussion in the northern city of Rostock
(photo credit: REUTERS)
Advertisement
BERLIN - A 14-year-old Palestinian girl who burst into tears when Chancellor Angela Merkel told her she might be deported has been granted a residency permit to stay in Germany until October 2017, mass-selling daily Bild reported on Thursday.Reem Sahwil began to cry during a televised discussion forum in July when Merkel told her that Germany could not admit everyone who wanted to live there.Merkel stroked Sahwil on the back, drawing mockery online from critics who accused her of looking clumsy and lacking empathy. A video clip of the exchange went viral and started the hashtag #merkelstreichelt (merkelstrokes).Sahwil has now been granted a residency permit lasting until Oct. 17, 2017, Bild said it had learned from the immigration office in the northern city of Rostock."Merkel's girl can stay here!" Bild screamed in a headline in its Thursday edition, adding that Sahwil was excelling at school and that her parents and brother could also stay.
Merkel comforts young Palestinian refugee
"I am pleased that Reem's residency status has been clarified," Lorenz Caffier, interior minister for the northern state of Mecklenburg-Vorpommern told Bild. "The period of uncertainty is over and she can stay here."There was nobody immediately available to comment at the Rostock immigration office when contacted by Reuters.Sahwil's crying episode was a low point this year for Merkel, who has since been named person of the year by both Time magazine and the Financial Times after opening Germany's borders back in August to refugees, many fleeing war in the Middle East.