A source with knowledge of the matter said that the two sides had discussed "politics, security and the future of the peace process." 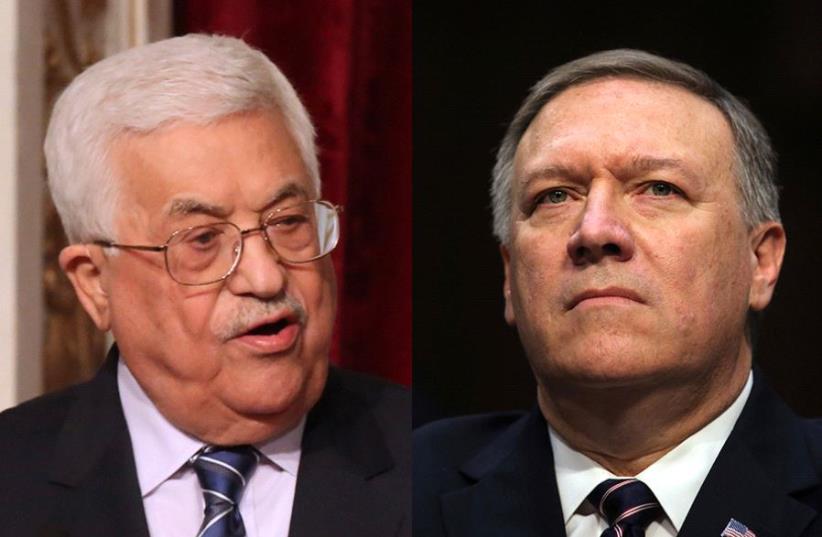 Pompeo and Abbas
(photo credit: REUTERS)
Advertisement
Palestinian Authority President Mahmoud Abbas met on Tuesday night with new CIA director Mike Pompeo, a Palestinian security source told The Jerusalem Post on Wednesday.The source with knowledge of the matter said that the two sides met at the Mukata, the PA Presidency’s headquarters in the West Bank city of Ramallah, and discussed “political and security issues in addition to the the future of the peace process."The source added that PA General Intelligence Chief Majed Faraj and a number of other senior PA officials attended the meeting. The CIA director was in Saudi Arabia over the weekend for his first overseas tour since being confirmed in late January. The meeting is the first time PA President Abbas and a member of the US administration have met since US President Donald Trump took his oath of office on January 20, and comes on the eve of Prime Minister Benjamin Netanyahu’s White House meeting with Trump.
US Senate confirms Pompeo to be Trump"s CIA director (credit: REUTERS)
Last week, PA General Intelligence Chief Majid Faraj met with US security officials in Washington, DC, the first meeting between a top Palestinian official and US administration officials.The meeting between Faraj and the US officials came after the Palestinian leadership made numerous abortive attempts to arrange meetings between Palestinian and US officials. On Tuesday morning, a White House official said that the two-state solution is not necessarily the only path to resolving the Israeli-Palestinian conflict. "A two-state solution that doesn't bring peace is not a goal that anybody wants to achieve," the official said. "Peace is the goal, whether it comes in the form of a two-state solution if that's what the parties want or something else, if that's what the parties want, we're going to help them.”Palestinian officials close to Abbas have been cautious in responding to the White House statement. Saeb Erekat, the PLO Executive Committee secretary-general and a senior Abbas aide, sidestepped, told a group of reporters in Jericho on Wednesday that the Palestinian leadership would like to hear directly from the US administration rather than through media reports. “We want to hear from you and not about you. And we want you to hear us and not to hear about us,” Erekat said. Erekat added that the Palestinian leadership hopes Trump will “reaffirm and repeat the position of successive past American administrations that the solution is represented in the two-state option, a Palestinian state living in peace and security next to Israel.”