The growers visited the strawberry fields in the central Israeli moshavim Achituv and Geulim, to further examine the role of integrated pest management in the field. 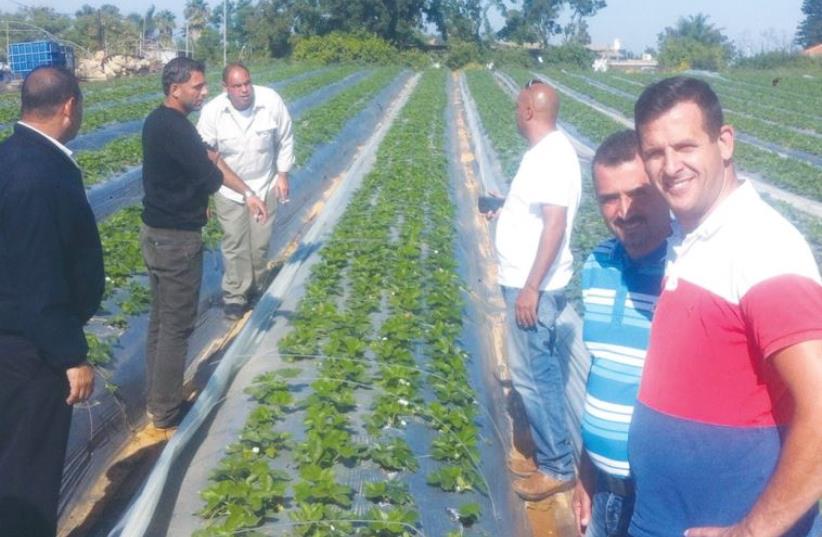 PALESTINIAN FARMERS visit an Israeli strawberry field last Thursday to learn about using insects as biological pesticides
(photo credit: CIVIL ADMINISTRATION)
Advertisement
After years in which insects have been optimizing Israeli crop growth by serving as biological pesticides, the Civil Administration of Judea and Samaria has begun to bring these same friendly bugs to West Bank Palestinian farmers.Five Palestinian strawberry growers, from the Tulkarm and Jenin areas, are taking part in a pilot program to bring integrated pest management – the combined use of natural insect and chemical pesticides – to their strawberry plots.By employing wasps to combat destructive aphids, farmers are able to decrease the use of chemical pesticides by about 80 percent, strengthening consumer health and increasing the product value, according to the Civil Administration.The administration has been conducting meetings between the Palestinian growers and Kibbutz Sde Eliyahu-based BioBee Biological Systems Ltd., which specializes in natural pesticide use, over the past three months. During these sessions, the farmers studied the various diseases and pests that threaten strawberries, as well as the employment of both natural pesticides and permitted chemical preparations to combat their spread.On Thursday, the growers visited the strawberry fields in the central Israeli moshavim Achituv and Geulim, to further examine the role of integrated pest management in the field, the Civil Administration said.Following the arrival of two shipments in the past two weeks, the Palestinian growers also began employing the combined pest control system in their own strawberry farms, Samir Moaddi, agricultural staff officer at the Civil Administration, told The Jerusalem Post on Monday.“We are trying to train them how to use it because it is not easy,” said Moaddi, who also serves as the Agriculture Ministry’s agricultural coordinator for Judea and Samaria.These five strawberry farmers have been part of a broader cultivation pilot program launched in mid-2014 by the Civil Administration, in conjunction with USAID.As part of that program, the farmers received financial support and guidance to upgrade strawberry facilities on 0.3 hectares worth of their own land, Moaddi told the Post on a tour in January. Since then, the amount of land has expanded to 0.6 hectares, a number that he said on Monday he hopes to see grow to 1 hectare soon.As far as the integrated pest management project is concerned, Moaddi said that the Civil Administration is evaluating the possibility of bringing an Arab-Israeli farmer experienced with the system’s use to help guide the Palestinians on their own farms.By reducing the amount of chemical pesticides required to promote optimal crop growth, the use of friendly insects enables farmers to save money, while improving the environment and public health, according to Moaddi.Adoption of more sophisticated agricultural techniques can also enable Palestinian farmers to bring their output up to internationally acceptable standards, he added.After hearing about the pilot program with the Tulkarm and Jenin strawberry growers, pepper cultivators in the Kalkilya area have also expressed interest in learning how to use the integrated pest management system, he said.The process of integrating the pest control system may be gradual, but Moaddi expressed his confidence that the strawberry farmers he is working with will reap its benefits, as their crops grow stronger with more environmentally friendly protection.“We started with them slowly; it’s not easy,” he said. “But the fact is that we succeeded to convince them that they should do this.”“They want to develop,” Moaddi added. “They don’t have the tools. We are trying our best to help them.”