The pope's call goes out to tens of thousands of Catholic parishes in Europe as the number of refugees arriving over land through the Balkans and across the Mediterranean to Italy and Greece hits record levels. 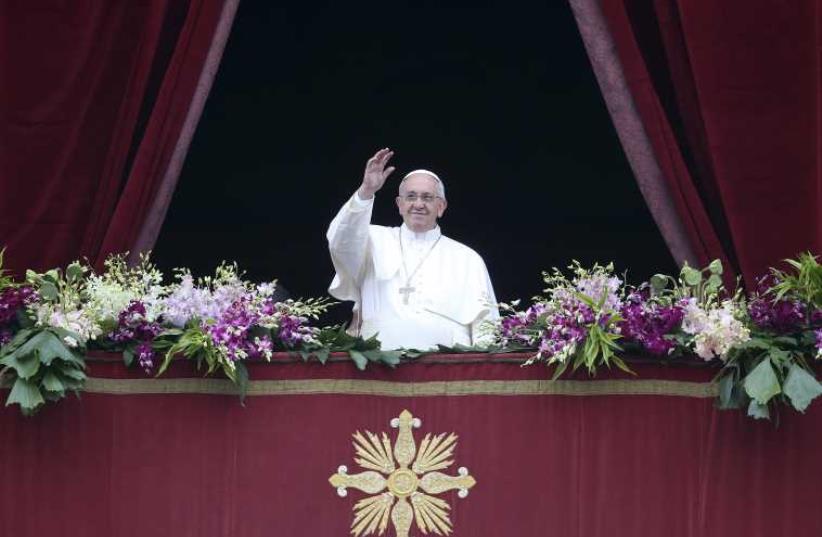 Pope Francis waves as he delivers a "Urbi et Orbi" message at the Vatican April 5, 2015
(photo credit: REUTERS)
Advertisement
Pope Francis called on Sunday on every European parish and religious community to take in one migrant family each in a gesture of solidarity he said would start in the tiny Vatican state where he lives."I appeal to the parishes, the religious communities, the monasteries and sanctuaries of all Europe to ... take in one family of refugees," he said after his Sunday address in the Vatican.The pope's call goes out to tens of thousands of Catholic parishes in Europe as the number of refugees arriving over land through the Balkans and across the Mediterranean to Italy and Greece hits record levels.There are more than 25,000 parishes in Italy alone, and more than 12,000 in Germany, where many of the Syrians fleeing civil war and people trying to escape poverty and hardship in other countries say they want to end up.The crowd in St. Peter's Square applauded as the pontiff, himself the grandson of Italian emigrants to Argentina, said: "Every parish, every religious community, every monastery, every sanctuary of Europe, take in one family."The Vatican's two parishes will take in a family of refugees each in the coming days, said Francis, whose first trip after his election was to the Italian island of Lampedusa, halfway between Sicily and Tunisia, where many migrants arrive by boat.The Italian coast guard said on Saturday it had coordinated the rescue of 329 migrants who made distress calls from their rubber boats.Francis said taking in migrant families was a "concrete gesture" to prepare for the extraordinary Holy Year on the theme of mercy which is due to begin on Dec. 8.