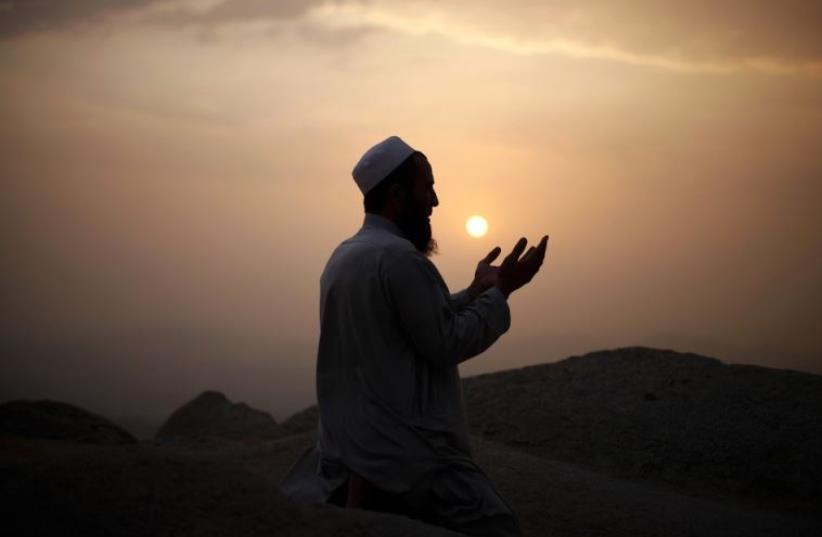 A Muslim pilgrim prays atop Mount Thor in the holy city of Mecca ahead of the annual haj pilgrimage
(photo credit: REUTERS)
Advertisement
Top rabbis will attend a historic conference in Morocco on safeguarding the rights of religious minorities in Muslim countries, The Jerusalem Post learned Thursday.Organizers of the January 25-27 conference in Marrakesh include the government of Morocco and the Forum for Promoting Peace in Muslim Societies, which hope to formulate a new declaration rooted in the Prophet Muhammad’s Medina Charter, which articulates how Islamic law calls for the protection of religious minorities.Prominent Muslims scholars, jurists, religious leaders and government officials will also attend.Only good governance can protect minority communities, Shaykh Hamza Yusuf, co-founder of Zaytuna College in California and vice president of the Forum for Promoting Peace in Muslim Societies, said in a conference call.He said the Jewish community in Morocco and those that have emigrated have acknowledged the protection the government gave them.He added that the United Arab Emirates is also involved in the conference.Asked by the Post which Jewish leaders plan on attending, organizers on the call named Rabbi David Rosen, former chief rabbi of Ireland, who is the international director of interreligious affairs of the American Jewish Committee and director of AJC’s Heilbrunn Institute for International Interreligious Affairs.Shaykh Abdallah Bin Bayyah, the leader of the conference, invited rabbis from around the world, as well as Christian and other religious leaders.A Conservative rabbi from the Jewish Theological Seminary of America is also to attend.Also on the call were Dr. Mohamed Elsanousi, Director of the Secretariat of The Network for Religious and Traditional Peacemakers in Washington, who previously served as director of community outreach for the Islamic Society of North America (ISNA), and Imam Mohamed Magid, executive director of the All Dulles Area Muslim Society, who is also involved in ISNA’s activitiesMagid, a Sudan native, is one of the American Muslim leaders who has consulted with President Barack Obama.Questioned how this conference would have any real influence on the reality on the ground, Hamza responded that many Muslims are unaware that Islamic tradition has ways to allow for full enfranchisement of minorities based on “the prophet’s many statements of responsibilities toward minority communities.”He asserted that the idea already has influenced Tunisia’s constitution.Hamza also argued that positive initiatives usually are not mentioned by the media, which focuses on negative news that serves to “distort” the view of Muslims as fanatics.Peaceful Muslims are the silent majority, he said.Daniel Pipes, historian and president of the Middle East Forum think tank, told the Post he was skeptical about the conference since “they can hardly signal more overtly than this that they are Islamists.”“They want to treat religious minorities as the Shari’a [law] requires, perhaps tweaking the rules slightly to make them less obnoxious to a modern sensibility,” asserted Pipes.“But the essential conditions of dhimma – Muslim superiority, special burdens on the minorities, restrictions on minority behavior – will surely remain in place.”ISNA, however, is controversial, and has been linked with Hamas and has been accused of being a front organization for the Muslim Brotherhood.The Canada Revenue Agency revoked the charitable status of ISNA after it said it distributed over $280,000 to an agency allegedly linked to a terrorist organization in Pakistan, the Toronto Sun reported in 2013.“The government of Canada has made it clear that it will not tolerate the abuse of the registration system for charities to provide any means of support to terrorism,” the CRA said at the time.