Asylum seekers described incidents including having their doors smeared with dog excrement, eggs and stones thrown at their windows and racist jibes shouted at them. 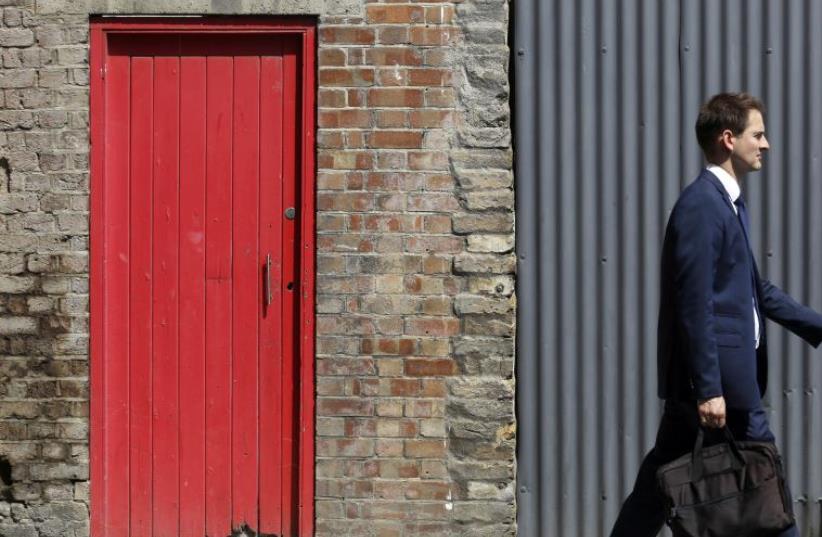 A man passes a red door and corrugated iron in central London
(photo credit: REUTERS)
Advertisement
LONDON - Asylum seekers in the northern English town of Middlesbrough are suffering abuse because they have been housed in properties that almost all have red front doors, making them easy targets for racists, the Times newspaper reported on Wednesday.Asylum seekers described incidents including having their doors smeared with dog excrement, eggs and stones thrown at their windows and racist jibes shouted at them, the Times said in an investigative report.Britain has not received migrants in the same huge numbers that arrived in other European countries last year, but public concerns over immigration are running high and tensions have risen in many communities with high concentrations of migrants.The Middlesbrough houses, located in poor areas of the industrial town, are owned by private property firm Jomast, a subcontractor of outsourcing giant G4S which holds a government contract to provide housing for asylum seekers in the region."Our subcontractor Jomast has no policy to house asylum seekers behind red doors, although they do accept that the majority of doors, for both private and asylum accommodation, are painted red," said a G4S spokesman."Although we have received no complaints or requests on this issue from asylum seekers we house, in light of the concerns raised Jomast has agreed to address the issue by repainting front doors in the area so that there is no predominant color."Jomast could not immediately be reached for comment.Immigration Minister James Brokenshire said in a statement he was deeply concerned by the report and had commissioned interior ministry officials to conduct an urgent audit of housing for asylum seekers in the northeast of England."If we find any evidence of discrimination against asylum seekers it will be dealt with immediately as any such behavior will not be tolerated," Brokenshire said.The Times said it had identified 168 houses owned by Jomast in two of Middlesbrough's poorest districts, of which 155 had red doors. Reporters spoke to people living at 66 of the properties with red doors and found that 62 of them housed asylum seekers of 22 nationalities.The newspaper quoted residents Yusuf Abdullahi, from Iran, and Ahmad Zubair, from Afghanistan, as saying that they had become so tired of suffering abuse that they repainted their front door white, but a Jomast worker repainted them red."Asylum houses have red doors. Everyone knows that," Zubair was quoted as saying. "People were shouting outside the house, calling us hate words, throwing things at our windows and banging on the door."Abdullahi was quoted as saying that a Jomast worker who came to the property and saw the freshly painted white door said that was against company policy.