At least 23 killed in explosions targeting Iranian embassy in Beirut

By MICHAEL WILNER, HERB KEINON, REUTERS
NOVEMBER 19, 2013 17:23
Site of blasts in southern Beirut 370
(photo credit: REUTERS)
Advertisement
Two suicide bombings rocked Iran’s embassy compound in Beirut on Tuesday, killing at least 23 people and hurling bodies and burning wreckage across a debrisstrewn street.An Iranian cultural attaché was among the dead.The Abdullah Azzam Brigades, a Lebanon-based al- Qaida-linked group, claimed responsibility and threatened further attacks unless Iran withdrew its forces from Syria, where they have joined President Bashar Assad’s war against mostly Sunni rebels.Security camera footage showed a man wearing an explosives belt rushing toward the outer wall of the embassy before blowing himself up, Lebanese officials said. A car bomb parked two buildings away from the compound caused the second, deadlier explosion, they added.The Lebanese army, however, said both blasts had been suicide attacks.In a Twitter post, Sheikh Sirajeddine Zuraiqat, the religious guide of the Abdullah Azzam Brigades, said his group had carried out the attack.“It was a double martyrdom operation by two of the Sunni heroes of Lebanon,” he wrote.Lebanon has suffered a series of sectarian clashes and bomb attacks, on both Sunni and Shi’ite targets, that have been linked to the Syrian conflict and that have already killed scores of people this year.Tuesday’s bombing took place on the eve of more talks between world powers and Iran over Tehran’s nuclear program.The bombs also struck as Assad’s forces extended their military gains in Syria before peace talks that the United Nations hopes to convene in mid-December and that Iran says it is ready to attend. 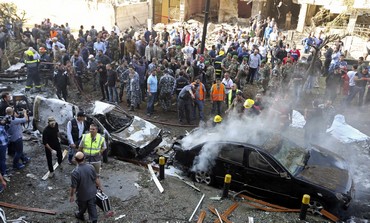 Shi’ite Iran actively supports Assad, and two of its Revolutionary Guard commanders have been killed in Syria this year. Along with fighters from the Lebanese Shi’ite movement Hezbollah, Iran has helped to turn the tide in Assad’s favor at the expense of rebels backed and armed by Sunni powers Saudi Arabia and Qatar.A Reuters cameraman at the scene counted six bodies outside one entrance to the embassy compound. Body parts were strewn as far as two streets away, and several cars were badly damaged.The embassy’s sturdy metal gate was twisted by the blasts, which Lebanese Health Minister Ali Hassan Khalil said had killed 23 people and wounded 146.Iran’s IRNA news agency quoted an Iranian Foreign Ministry spokeswoman as saying the bombs were “an inhuman and vicious act perpetrated by Israel and its terror agents.”Iranian Ambassador Ghazanfar Roknabadi said that “whoever carries out such an attack in these sensitive circumstances, from whichever faction, knows directly or indirectly that he is serving the interests of the Zionist entity.”However, Likud MK Tzachi Hanegbi unequivocally rejected the claims.

Speaking to reporters at an Israel Project briefing focused on the Iranian nuclear talks, Hanegbi said it was “humoristic” that a country that had perpetuated terrorism around the world was now blaming others.“We are blamed for anything that happens in the Middle East.Sometimes these are things we take responsibility for because they have to do with Israel’s security. But Israel’s security gains nothing by bloodshed in Beirut or in any Arab capital or state, and [Tuesday’s terrorism] is the result of tension in Lebanon following the decision of Hezbollah – or Iran forcing Hezbollah – to participate in Assad’s effort to survive in Syria,” he said.Israel has nothing to with this attack or any recent bomb attacks in Lebanon, he stated.Meanwhile, US Secretary of State John Kerry condemned the bombings as “senseless and despicable terrorism.”“The United States knows too well the cost of terrorism directed at our own diplomats around the world, and our hearts go out to the Iranian people after this violent and unjustifiable attack claimed the life of at least one of their diplomats,” Kerry said.The timing of the overture to Iran – a day before talks were to resume in Geneva over Iran’s nuclear program – was the subject of questions from journalists at the daily State Department press briefing with spokeswoman Jen Psaki.“I think this was just obviously a tragic event that was important to condemn, and send that strong message,” Psaki said, adding that the US position on Iran being the world’s leading state sponsor of terrorism “has not changed.”United Nations Secretary-General Ban Ki-moon condemned the attacks as well, extending his condolences to the governments of Iran and Lebanon and calling for “expeditious” justice.“The secretary-general calls on all in Lebanon to recognize that such appalling and indiscriminate acts of violence target all in Lebanon,” Ban’s spokesman said in a statement. “He urges all Lebanese parties to act with restraint and to support the institutions of the state, and particularly the security forces, as they seek to prevent further acts of terrorism.”Britain’s Foreign Secretary William Hague condemned what he described as a “shocking terrorist attack,” and France expressed “solidarity with the Lebanese and Iranian authorities.”Politicians from across Lebanon’s Sunni, Shi’ite and Christian communities condemned the attacks.Meanwhile, in Syria, the government said its soldiers had taken full control of the town of Qara, which straddles a highway from Damascus to government strongholds on the coast and which Sunni rebels used to cross into Syria from Lebanon.The fall of Qara may mark the start of a wider offensive by the army, which has had backing from Hezbollah and Shi’ite fighters from Iraq, to recapture the mountainous border region of Qalamoun and consolidate Assad’s control of territory around Damascus and close to the Lebanese border.Hezbollah’s military role in Syria has helped to inflame sectarian tension there and in Lebanon. Many Lebanese Sunnis back the Syrian rebels, while many Shi’ites support Assad.Ayham Kamel, a Middle East analyst with the Eurasia Group, said the embassy bombing was an attempt by supporters of the Sunni rebels to weaken Hezbollah’s and Iran’s support for Assad, undermine the Qalamoun campaign and possibly pressure Tehran before Wednesday’s nuclear talks.“While sectarian tensions in Lebanon will increase, Hezbollah’s retaliatory response will be centered on Syria, where [it] will further commit military forces to eliminate the Sunni rebel threat along the Syrian-Lebanese borders,” Kamel said.The Abdullah Azzam Brigades has strong links in Lebanon’s Palestinian refugee camps, as well as connections with the Gulf. Two of its senior military leaders are Saudi nationals, said Charles Lister, an analyst at IHS Jane’s Terrorism and Insurgency Center.“This attack is a significant escalation. After months and months of speculation, an al- Qaida-linked group has now underlined its involvement in the Syria-related Lebanese theater,” he said.Syrian Information Minister Omran Zoabi implicitly blamed Saudi Arabia and Qatar for supporting Sunni terrorists, who have been blamed for previous attacks against Shi’ite targets.Footage from local news channels showed charred bodies on the ground as flames rose from stricken vehicles. Emergency workers and residents carried victims away in blankets.“These kinds of explosions are a new and dangerous development,” said the head of Hezbollah’s parliamentary bloc in Lebanon, Muhammad Raad.Earlier this year, three explosions hit Southern Beirut, a Hezbollah stronghold. Those attacks, blamed on groups linked to the Syrian rebels, are believed to have been in retaliation for the group’s military role in Syria.Three decades ago, Iranian backed Shi’ite terrorists carried out devastating suicide bombings in Lebanon that hit the US Embassy as well as US, French and Israeli military bases.
Advertisement
Subscribe for our daily newsletter