Report: Commander of elite Iranian force met with Russian leaders despite US sanctions 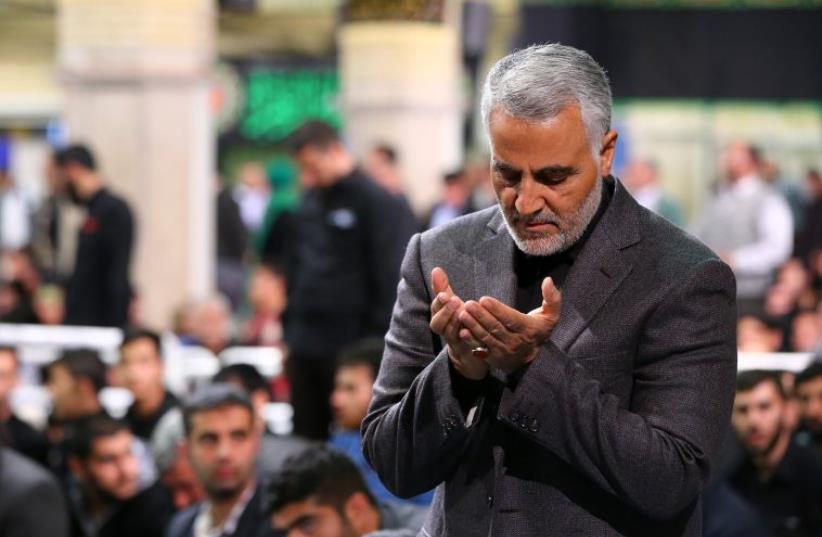 commander of the Iranian Revolutionary Guard's Quds Force, Gen. Qassem Suleimani, attending a religious ceremony in Tehran to commemorate the anniversary of the death of Fatima, the daughter of Prophet Mohammed.
(photo credit: AFP PHOTO)
Advertisement
According to reports from FOX News, in July, the chief of Iran's elite Quds Force visited Moscow to meet with senior Russian figures, violating international sanctions and travel restrictions placed on key members of the Iranian regime. Qassem Suleimani, whose wing of the Iranian Revolutionary Guard is only answerable to Ayatollah Khameini, and who has emerged as a pivotal on-the-ground figure spearheading Iran's broader regional ambitions in the Middle East, was allegedly in Russia  between July 24 and July 26, shortly before Secretary of State John Kerry's testimony before a Senate Armed Services Committee regarding the nascent nuclear deal between the Islamic Republic and international powers.Suleimani apparently departed from Tehran aboard Air Iran flight #5130, which was billed as a commercial flight and returned aboard flight #5120, western intelligence sources are cited as saying.  His presence in Russia, predating the lifting of sanctions entailed in the Joint Comprehensive Point of Action, signed between the P5+1 nations and Iran on July 14, constitutes a technical violation of  international law. During his visit to Russia, the secretive commander, who has been sparingly photographed in Iraq, where he has instructed and led Shi'ite militias against Islamic State militants in key battles, is said to have met with Russian Defense Minister Sergei Shoigu and President Vladimir Putin.The substance of these talks could not be confirmed, but Russia, which has lifted its own restrictions on providing Iran with military hardware and has planned on providing Tehran with advanced S300 anti-aircraft missiles, is considered to be eying an Iranian weapons market whose demands will grow following the lifting of Washington's arms embargo, set to end in five years.  China, which has also signed agreements with Iran's defense establishment, has been promised a 20 year contract to access Iran's oil field in exchange for 24 J-10 fighter jets, an advanced combat aircraft, dubbed the “Vigorous Dragon, that was allegedly based on the Lavi, an Israeli prototype whose manufacturing scrapped in the '80s.Apart from more strategic meetings, a feature of Suleiman's stay in Russia has been described as "fun time" with local entertainment. Suleimani, designated a terrorist and placed under US sanctions in 2005, has been tied by the US Treasury Department to a number of subversive activities, including a unsuccessful plot to assassinate the Saudi Kingdom's ambassador to the United States during a visit to the Washington. It is widely believed by senior American military figures that Suleimani's activities in Iraq predate the ascension of the Islamic State, and are linked to the deaths of hundreds of American soldiers during the more than eight-year conflict. Joseph Dunford, the incoming chairman of the Joint Chiefs of Staff claimed that the number of American soldiers killed due to Iranian meddling in Iraq "has been recently quoted as about 500," but that despite suspicions of "Iranian activity...we didn't necessarily have the forensics to support that."