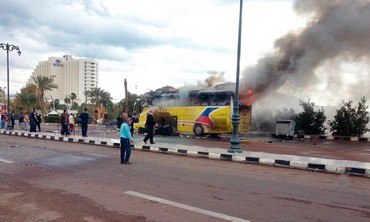 An explosion tore through a bus carrying South Korean Christian tourists from Sinai to the Israeli border on Sunday, killing four people and wounding around 15.The Egyptian Interior Ministry said three tourists and an Egyptian bus driver died in the attack, adding that the bus had been traveling to Israel from St. Catherine’s Monastery, a popular tourist destination in southern Sinai.State television showed a photograph of the bus. Its windows were blown out and the roof had been partially torn off. Plumes of black smoke billowed from the site of the explosion on a palm tree-lined boulevard.The ministry did not state the cause of the blast. But Reuters cited two Egyptian security sources as saying that an explosive device planted either inside or near the bus was used.The bomb, which went off some 50 meters from the border with Israel, appeared to have been activated minutes before the passengers were due to exit the vehicle and cross the border on foot, via the Taba terminal.Residents of Eilat heard the attack, and reported seeing smoke rising from across the border.The IDF’s Southern Command and Magen David Adom went on high alert after the bombing.Dozens of MDA ambulances lined up on the Israeli side of the Taba crossing to receive the wounded and transfer them to Joseftal Hospital in Eilat. But MDA’s plans of receiving up to 15 people thought to be suffering from light to moderate wounds did not materialize after Egypt hospitalized all of the wounded in its own facilities.MDA said earlier it was in touch with the Foreign Ministry, the IDF and representatives from the Red Crescent to facilitate any needed assistance.Some Egyptian media reported that the Sinai-based terror organization Ansar Bayt al-Maqdis was behind the incident.In English, the Muslim Brotherhood condemned the attack; however, in Arabic, it tweeted that some of those killed were “Zionists.”Al-Qaida-inspired Islamists based in largely lawless Sinai have stepped up attacks on security forces, killing hundreds, since army chief Abdel Fattah al-Sisi ousted elected president Mohamed Morsi of the Brotherhood in July.If terrorists were behind Sunday’s attack, that would mark a shift in strategy to targeting tourists and economic targets, and not just Egyptian police and soldiers.Tourism Minister Hisham Zaazou said he was “very disappointed” by the attack, which revived memories of an Islamist insurgency in the 1990s.“I hope this will be an isolated incident that will not reoccur. This is my wish. I’m reassuring that all the rest of the country is safe and secure and what happened can happen anywhere in the world,” Zaazou said.