By REUTERS, NOAM AMIR/MAARIV HASHAVUA, JPOST.COM STAFF
Alleged IDF bombing of targets in Syria
(photo credit: ARAB SOCIAL MEDIA)
Advertisement
Syrian state television said on Sunday that Israeli jets had bombed areas near Damascus international airport and in the town of Dimas, near the border with Lebanon. "The Israeli enemy committed aggression against Syria by targeting two safe areas in Damascus province, in all of Dimas and near the Damascus International Airport," state television said, adding that there were no casualties.

Residents in Damascus said they heard loud explosions.The Syrian Observatory for Human Rights, which tracks the conflict, said that 10 explosions were heard near Dimas.

According to foreign reports the attack targeted a warehouse of advanced S-300 missiles, which were en route from Syria to Hezbollah in Lebanon. 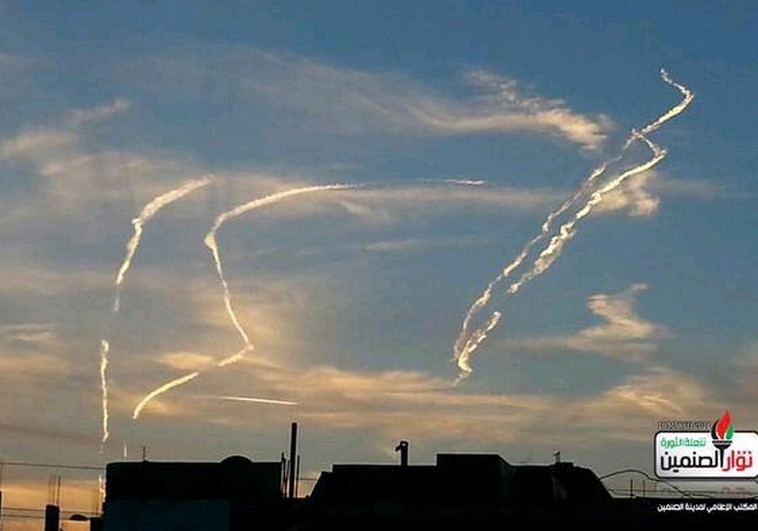 Israel strike on syria.(photo credit: ARAB SOCIAL MEDIA)The IDF does not comment on such operations. In January, Israeli fighter planes bombarded S-300 missile launchers in the Syrian port city of Latakia, Syrian opposition groups said.Despite Syrian opposition claims, it is unclear if Syria has even acquired the S-300 system. Russian President Vladimir Putin revealed last September that the delivery was suspended, even though some components had been delivered.Israel has repeatedly warned that it is prepared to use force to prevent advanced weapons, particularly from Iran, reaching Hezbollah through Syria. According to foreign reports, Israel reportedly carried out several air strikes on Syria earlier this year.Ariel Ben Solomon contributed to this report