A Jordanian newspaper reported on Thursday that Jordan will not agree to extradite terrorist Ahlam Tamimi to the US, where she would have been tried for killing Americans during the Second Intifada. 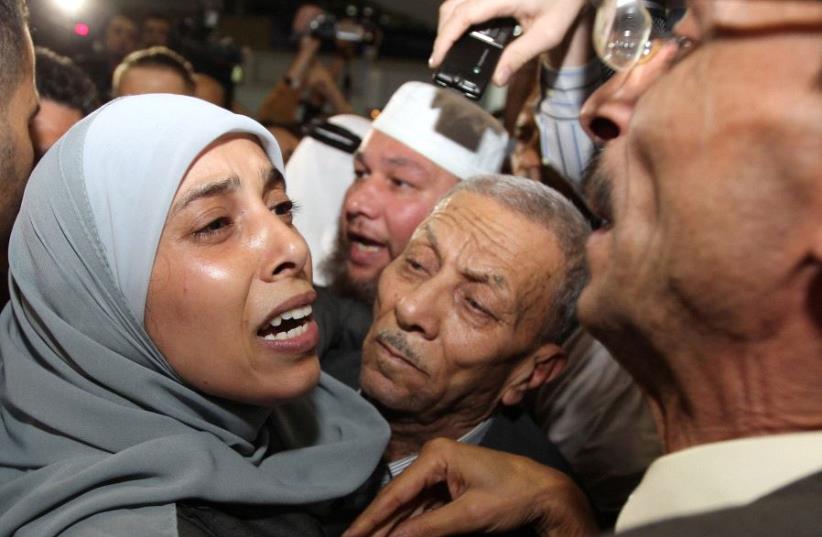 A Jordanian newspaper reported on Thursday that Jordan will refuse a US request to extradite terrorist Alham Tamimi.
(photo credit: REUTERS)
Advertisement
Jordan will not approve a US request to extradite Hamas-affiliated terrorist Ahlam Tamimi, who the US wanted to try for killing Americans during the Second Intifada, Jordanian newspaper Al-Ghad reported on Thursday. Citing several reasons for Jordan's alleged refusal, Al-Ghad reported that Jordanian legal officials have said that the extradition was "not permissible" based on the fact that Tamimi was already tried in Israel and mostly because there is no existing extradition treaty between the US and Jordan.Channel 2 noted on Thursday that Jordanian sources are claiming that there actually is an extradition treaty between the United States and Jordan that was signed back in 1995, but was never approved by the Jordanian parliament and is being overlooked by the latter for this reason.Ahlam Tamimi served time in Israeli prisons for multiple murders in connection to the August 9, 2001 Sbarro Pizza suicide bombing that claimed the lives of 15 civilians, including seven children and one pregnant woman, and wounded 130 people. Tamimi assisted the bomber, Izz al-Din Shuheil al-Masri, by scouting for a target and leading him into the Jerusalem restaurant. After getting released from prison in the 2011 Schalit prisoner exchange deal with Hamas, Tamimi returned to Jordan where she now works as a television host and where she is hailed by many as a symbol of the Palestinian resistance.   According to Al-Ghad, Saleh Armouti, a Jordanian official currently serving as an MP in Jordan's House of Representatives, not only justified Jordan's alleged decision to refuse the request,  but also went on to release a statement in defense of the released terrorist. "[It was] the legitimate right of the liberated prisoner Ahlam Tamimi [to] resist the occupier, as the United Nations laws stipulate the right to self-determination, as ruled [by] international legitimacy [as] the right to resist the occupation." The US Department of Justice made the official extradition request this Tuesday after the FBI had placed the terrorist on its Most Wanted Terrorists List.
The Sbarro suicide bombing attack in Jerusalem on August 9, 2001 (credit: IDF SPOKESPERSON"S UNIT)
If the request is indeed granted by Jordan it will set a precedent in the US, seeing as prior to US President Donald Trump's election, the only legal proceedings against terrorists who have harmed Americans were criminal proceedings which took place in Israeli courts or civil wrongful death proceedings. Al-Ghad also quoted Jordanian MP Armouti as saying that the US requested the extradition due to political motives, claiming that it was not a legal concern that inspired the request but rather Trump's inclination to support his close ally Israel. "[Trump's policy] is not limited to Tamimi only, but [is] trying hard to support the occupation in any way by prosecuting activists who resist him and putting it in the category it calls 'the American administration's [efforts ] to fight terrorism." Armouti also explained that from a legal viewpoint, Jordan cannot possibly extradite Tamimi because the country's laws do not permit that an individual be retried for the same crime. Last week, following the news that the US sought Tamimi's extradition, Yitzhak Bennett Finer, the father of Chana Nachenberg, who perished in the Sbarro bombing, told the media: "We applaud the efforts of the Department of Justice in trying to bring Tamimi to justice and we hope they'll be successful. Our daughter had the prime of her life taken from her... as a result of this inhuman act of the heinous bombing."