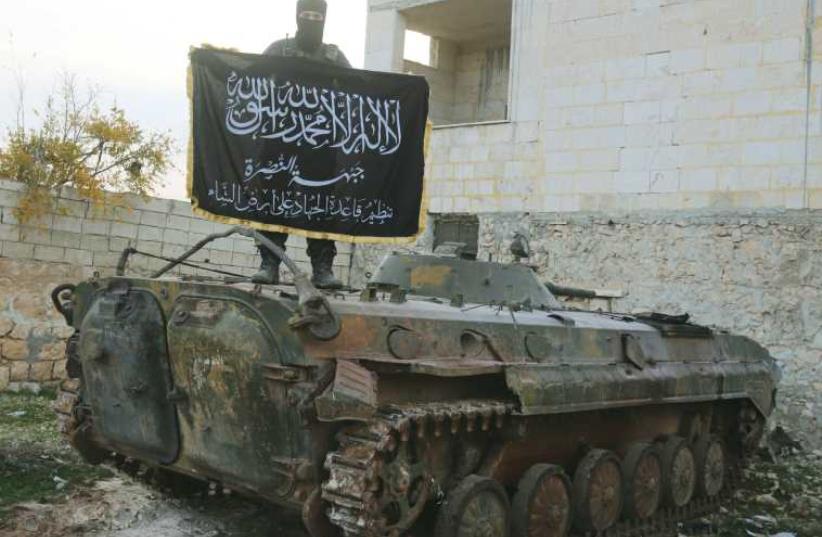 A member of al-Qaida’s Nusra Front fighting with other Sunni Islamists in support of the Syrian opposition pose on a tank near Aleppo in November 2014.
(photo credit: REUTERS)
Advertisement
A senior commander of the al-Qaida linked Nusra Front in Syria has been killed, Iran's Fars News Agency reported on Saturday. Abu Jalibib al-Ordoni, a senior commander of the group, was reportedly killed in a bomb explosion in Dara'a, according to "battlefield sources." According to the report, Nusra "has lost tens of ranking and top regional commanders in the war with Damascus troops and their allies in the last two months." Fars reported that Ismail Mouzafar another Nusra front senior commander was killed in clashed with forces of the Islamic State near Zabadani last week. Iran, along with Hezbollah and Russia, has backed Syrian President Bashar Assad in his fight against ISIS and other rebel groups operating in the country.  In July of this year,  it was reported that the Nusra Front had abducted the leader of a US-backed rebel group in northern Syria in a blow to Washington's efforts to train and equip fighters to combat Islamic State.The Nusra Front, which Washington has designated a terrorist organization, has a track record of crushing US-backed rebels in Syria. In 2104, it routed the Syria Revolutionaries Front led by Jamal Maarouf, viewed as one of the most powerful insurgent leaders until his defeat.It was also instrumental in the demise of the US-backed Hazzm Movement, which collapsed at the beginning of 2014 after clashing with the Nusra Front in the northwest of Syria. The US military launched the program in May of 2015 to train up to 5,400 fighters a year in what was seen as a test of President Barack Obama's strategy of getting local partners to combat Islamic State.