Rockets fired at U.S. military base in Iraq - report

The rocket fire comes amid tensions between the US and Iran and as Islamic State continues to threaten Iraq months after its defeat in Syria. 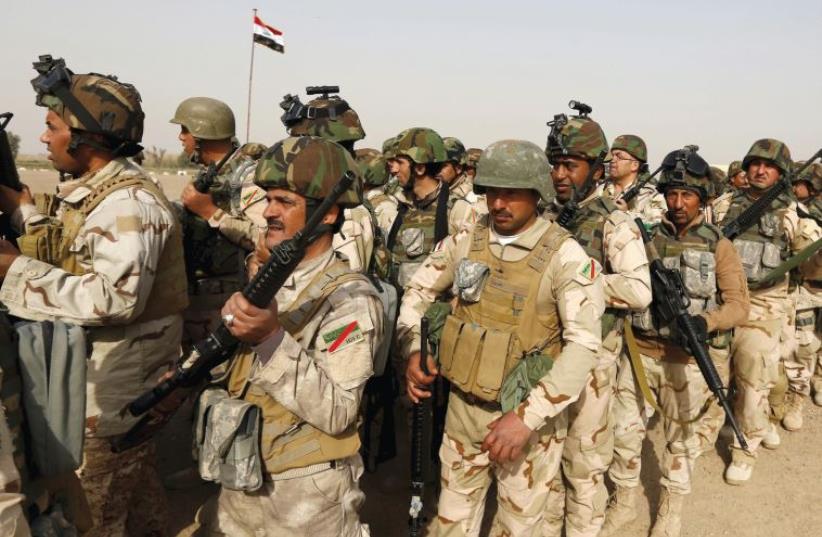 IRAQI SECURITY forces wait for vehicles traveling to Mosul to fight against Islamic State at an Iraqi army base in Camp Taji in Baghdad on February 21.
(photo credit: REUTERS)
Advertisement
Rockets were fired at Camp Taji, where US soldiers are based in Iraq, according to numerous reports on Monday evening. The rocket fire comes amid tensions between the US and Iran and as Islamic State continues to threaten Iraq months after its defeat in Syria.
Camp Taji, northwest of Baghdad is one of four locations used by Combined Joint Task Force Operation Inherent Resolve during the war against ISIS. It is a center of training for the US-led coalition that has been fighting ISIS since 2014. Taji was an important center for US forces and an area where detainees were kept in the past. It is a large military complex. It is essential for training.
Several hours after sunset on Monday reports emerged that three Katyushas had been fired at the base. Al-Arabiya reported the incident at ten in the evening.  Joyce Karam, Washington correspondent of The National wrote that “if true, more signed of escalation between US and Iran whose proxies have Katyusha.” Pro-Iranian paramilitaries in Iraq, many of them part of the Popular Mobilization Forces, or Hashd al-Shaabi have harassed US military personnel in the past. Rockets have been found pointed at US bases, according to reports in the past year.
Not every report noted the same information. One said five rocket struck the area, killing six. However there are Iraqis and coalition forces present, the identity of the alleged casualties were not identified, and it is likely an unverified or false report. Another report said mortars had fallen. On May 19 a rocket fired from Baghdad landed near the US embassy.
The New York Times reported the Taji incident, as did Rudaw in the Kurdistan region. Rudaw wrote that three Katyusha missiles fell on Camp Taji, north of Baghdad. It noted that three mortars had struck Balad Air base last Friday as well. Hoshyar Zebari, an official in the Kurdistan Democratic Party, condemned the earlier Balad attack.
This is a developing story. An inquiry to US CENTCOM had not been answered as of press time.