CNN quotes US officials as saying missiles fired from Russian ships in Caspian Sea missed their mark, may have caused injuries. 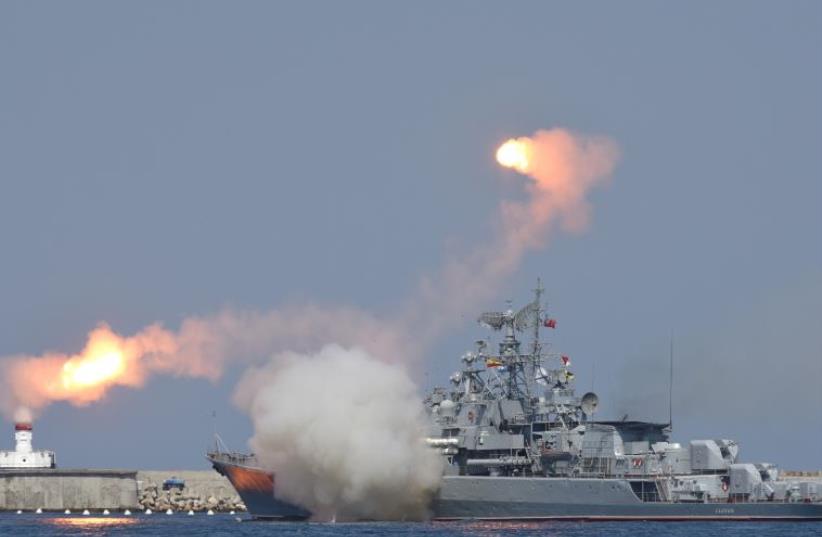 A Russian warship fires [File]
(photo credit: REUTERS)
Advertisement
Cruise missiles fired at targets in Syria from a Russian warship accidentally landed in Iran, CNN reported on Thursday, citing two US officials.According to the report, US intelligence detected that at least four Russian cruise missiles landed in Iran, with the possibility that one such erroneous strike may have caused casualties.Russia fired cruise missiles at Syrian targets this week without giving any advanced notice, US Defense Secretary Ash Carter said on Thursday, describing a trend of unpredictable military action that has put the United States and its allies on edge. Russia's Defense Ministry said on Thursday the four Russian cruise missiles fired at Syria from the Caspian Sea had reached their targets, Interfax news agency reported.
Russian warships launch 26 rockets on ISIS in Syria
"In contrast to CNN we do not talk with reference to anonymous sources," Interfax quoted Russian Defense Ministry spokesman Major General Igor Konashenkov as saying. "We show the launch of our rockets and the targets they struck." "We've seen increasingly unprofessional behavior from Russian forces. They violated Turkish airspace ... They shot cruise missiles from the Caspian sea without warning," Carter said after NATO defense talks in Brussels.Moscow said on Wednesday its warships fired a barrage of missiles at Syrian targets from the Caspian Sea, passing a distance of almost 1,500 km (900 miles) over Iran and Iraq to reach their targets.A US-led coalition is carrying out air strikes against Islamic State militants in both Iraq and Syria, a campaign that Washington has vowed will continue despite Russia's escalating military activity in Syria.The United States has acknowledged that US-led coalition aircraft bombing Islamist militants in Syria were re-routed at least once to avoid a close encounter with Russian planes. Carter said Russian aircraft came within a few miles of a US drone.The United States, which opposes Russia's backing of Syrian President Bashar Assad, has ruled out any military cooperation with Russia in Syria.But the Pentagon is seeking to work out an agreement with Moscow on operating procedures to ensure pilot safety. Reuters contributed to this report.