Diplomat says Russia privately accepts that Assad will have gone by end of transition period in Syria. 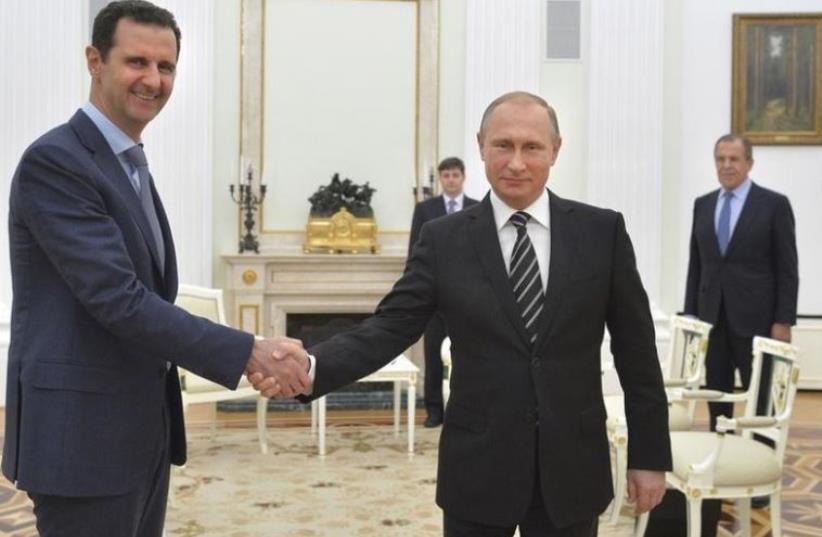 Russian President Vladimir Putin (R) shakes hands with Syrian President Bashar Assad at the Kremlin in Moscow, Russia, October 20, 2015
(photo credit: REUTERS)
Advertisement
UNITED NATIONS - Russia has made clear to Western nations that it has no objection to Syrian President Bashar Assad stepping down as part of a peace process, in a softening of its publicly stated staunch backing of Assad ahead of talks in New York, diplomats said.Russia, like Iran, has been a firm ally of Assad and is intervening militarily on his behalf against anti-government forces in the five-year civil war that has claimed more than a quarter million lives. Both Russia and Iran have long insisted Assad's fate should be decided in a nationwide vote.Western powers, Turkey, Saudi Arabia and others reluctantly agreed to allow Assad to remain in place during a transition period, a compromise that has opened the door to a shift on the part of Russia, Western diplomats said."What you've got is a move that will end up with Assad going," a senior Western diplomat said on condition of anonymity."And the Russians have got to the point privately where they accept that Assad will have gone by the end of this transition, they're just not prepared to say that publicly," he added.Several other Western officials confirmed the diplomat's remarks.The United States, Russia along with Iran, Saudi Arabia and major European and Arab powers have agreed on a road map for a nationwide ceasefire, to have six months of talks between Assad's government and the opposition on forming a unity government to begin in January, and to have elections within 18 months.There will be a third round of talks in New York on Friday at which U.S. Secretary of State John Kerry, Russian Foreign Minister Sergei Lavrov and over a dozen other ministers will aim to keep up the momentum to get a deal to end the war.US and European officials say that Assad cannot run in any elections organized along the lines major powers agreed in the two previous ministerial meetings in Vienna.Despite the narrowing of disagreements, there is still a deep divide in the negotiations on ending Syria's five-year civil war, diplomats and officials close to the talks said on condition of anonymity."Gradually the gap is narrowing but there is still a big gap," said one senior Western diplomat. "There are still countries that think Assad is the solution to fighting Daesh (Islamic State), which is the complete opposite of our view."Diplomats say that Russia has moved further than Iran on the question of abandoning the Syrian president if a transition plan can be agreed. For years, Iran has backed Assad with its own military personnel and, like Russia, with weapons, and it would lose face and influence if it gives up.The senior Western diplomat added that "Iran is not in the same place yet" as Russia on Assad.Another Western official said the key would be getting both Russia and Iran to agree precisely on how to abandon Assad."They have to drop him together and getting them to coordinate on that won't be easy," the official said.According to one senior Western diplomat, Russia already has a list of possible replacements for Assad, though he declined to provide details. It was not clear whether Iran had a list too.The fate of Assad will not be a focus of the ministerial meeting on Friday, though it is one that Washington and Moscow will continue to grapple with in bilateral talks, diplomats said.After those talks the Security Council is hoping to adopt a resolution endorsing the push for a political transition. Council diplomats say the five permanent members - Britain, China, France, Russia and the United States - have yet to agree on a text.Other challenges for the Syria talks include agreeing on a lineup for an opposition delegation to negotiate with Assad's government. A recent meeting in Saudi Arabia of opposition figures made significant headway, Western officials say, in coming up with an opposition bloc."Now we have a clear opposition that is not Daesh," Saudi Foreign Minister Adel al-Jubeir said. "We have negotiators sitting at the table. If the other side is serious, then, Bashar Assad and his allies, show me your team and let's have them get together."Syria accuses the Saudis, Qatar and Turkey of supporting Islamic State and other jihadist groups, something that all three have denied.