“They know they will have to respond. It is not pleasant, but that is the price it pays for its intervention in Syria.” former Israeli ambassador to Russia and Ukraine tells Post. 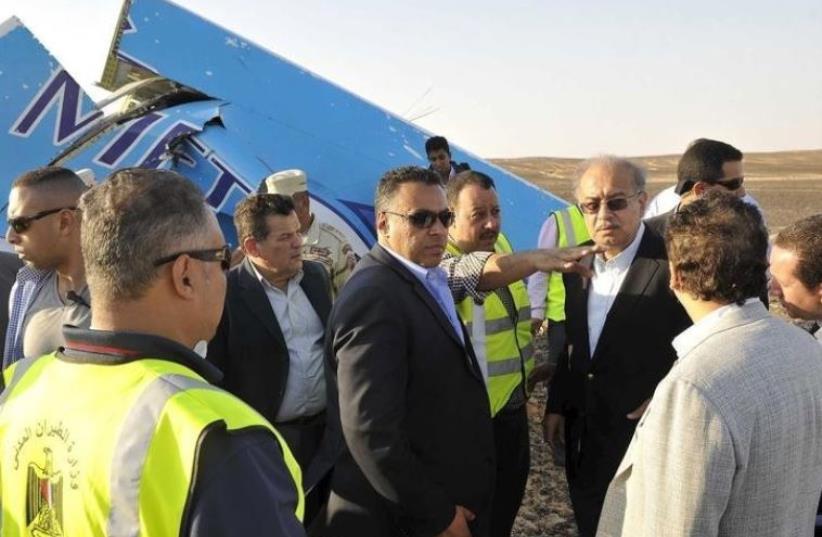 Egypt's Prime Minister Sherif Ismail (4rth R) at the remines of a plane crash at the desert in central Sinai near El Arish city north of Egypt, October 31, 2015
(photo credit: (AICF/CHRIS LEE))
Advertisement
Russia is likely to increase its military involvement in Syria due to the widely assumed terrorist bombing of the plane that crashed in Sinai on October 31.However, the consequences of such an escalation in Syria and perhaps elsewhere against Islamic State in the Middle East, is going to have to be weighed against the fallout – more attempts by the terrorist group to carry out attacks against Russia worldwide.Israel would closely follow any changes in Russia’s involvement in Syria, as it may hamper its own maneuverability in the country.Russia could also decide to sharply increase its support for Arab states and other proxy forces fighting against Islamic State. This could include the provision of military equipment and advisers, and even improved intelligence cooperation.
The Sinai plane crash: did ISIS do it?
Such steps to boost its action against Islamic State would further move regional forces opposing the group toward the Russian camp and away from the US, which is seen as providing weak support.Russian communications intercepted by US intelligence agencies show Russia believed the plane was brought down by a bomb, US sources familiar with the matter said on Monday.All 224 passengers and crew were killed when Metrojet Flight 9268 crashed in the desert on the way from Sharm e-Sheikh to St. Petersburg.Egypt and Russia have yet to formally announce the cause of the disaster. Both countries dismissed as premature US and British assessments last week that a bomb was likely responsible.Zvi Magen, a senior fellow with the Institute for National Security Studies, told The Jerusalem Post in an interview on Tuesday that Russia has been trying to avoid reality by declining to admit its plane was downed in a terrorist attack, as that fact may complicate its position.“They know they will have to respond. It is not pleasant, but that is the price it pays for its intervention in Syria,” said Magen, a former Israeli ambassador to both Ukraine and Russia.The worry for Russia, he said, is that if it decides to increase attacks against Islamic State, the country could suffer retaliation from the terrorist group’s supporters among its sizable Muslim population.Russian media propaganda is likely to use the attack to justify its intervention in Syria against Islamic State and other opposition Islamist groups, he said. The Kremlin is also likely to present the plane bombing as a small setback in its “heroic war against the terrorists in Syria.”In an INSS Insight article published on Sunday, Magen, Sarah Fainberg and Benedetta Berti wrote that Russia’s military intervention in Syria is being closely followed in Jerusalem, as it “constitutes a challenge to Israeli interests in this theater, and raises concern about future negative developments.”Daniel (Dima) Course, a founding member at the Israeli Center for Russian and Eurasian Studies, who teaches at Ariel University, told the Post that Russia is in a serious dilemma.From the start, there was a contradiction between their main strategic objective of ensuring the survival of President Bashar Assad’s regime and its Alawite enclave and its publicly claimed goal of defeating Islamic State.“Now it is clear that this mission is impossible without a large ground operation,” said Course.“The Russian media covered the tragedy in Egypt very cautiously, and the overall tone regarding the war in Syria right now is still somehow ‘triumphant,’” he explained.Course doesn’t see the plane attack as a trigger to a serious escalation in Syria, but sees the Russian promise of a short and elegant operation fading.Russia may find itself caught between the undesirable options of a major ground operation or a retreat, added Course.Reuters contributed to this report.