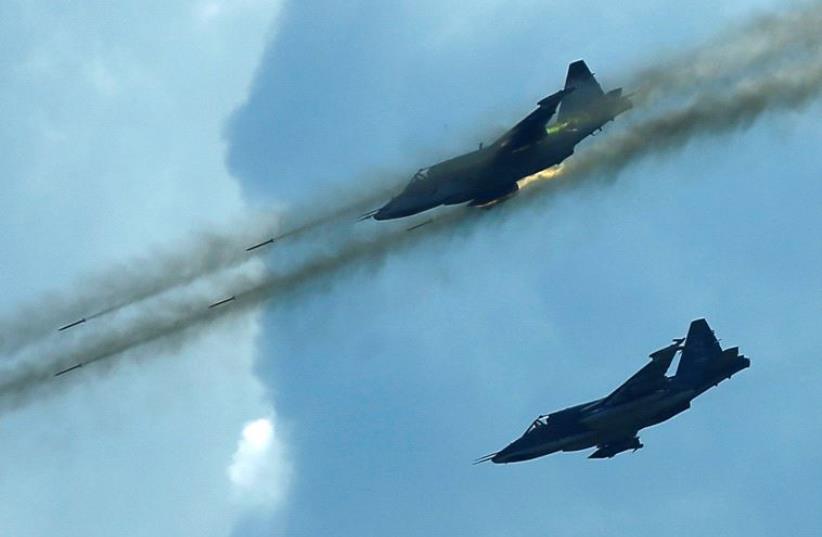 Russian Sukhoi Su-25 jet fighters
(photo credit: REUTERS)
Advertisement
AMMAN - At least 30 civilians were killed early on Thursday when jets dropped bombs on a residential area in a besieged rebel enclave east of Syria's capital, a war monitor said, identifying the planes as Russian.At least four bombs flattened two buildings in the Eastern Ghouta town of Misraba, in an attack that killed around 20 and wounded more than 40 people, the Syrian Observatory for Human Rights and civil defense sources said.Elsewhere in Eastern Ghouta, the last major rebel enclave near Damascus, at least ten people were killed in aerial strikes in other nearby towns, the Observatory, rescuers and residents said.The Observatory, a war monitor based in Britain, said 11 women and a child were among the dead in the strikes in Misraba, which it said were carried out by Russian planes.Backed by Russian strikes, government forces have escalated military operations against Eastern Ghouta in recent months, seeking to tighten a siege that residents and aid workers say is a deliberate use of starvation as a weapon of war, a charge the government denies.Russia rejects Syrian opposition and rights groups' accusations that its jets have been responsible for deaths of thousands of civilians since its major intervention two years ago that turned the tide in the country's nearly seven-year-old war in favor of President Bashar al-Assad.Moscow says it only attacks hardline Islamists.Video footage posted on Thursday by activists on social media in Eastern Ghouta showed rescue workers pulling women and children from rubble. The footage could not be independently confirmed.Jets also pounded Harasta, on the western edge of the enclave, where rebels this week besieged and overran a major military base which residents say the army uses to pound residential areas.The rebel assault aimed partly to relieve the pressure of the tightening siege.The United Nations says about 400,000 civilians besieged in the area face "complete catastrophe" because aid deliveries by the government are blocked and hundreds of people who need urgent medical evacuation have not been allowed outside the enclave.Scores of hospitals and civil defense centers in Ghouta and across Syria have been bombed during the conflict in what the opposition said is a "scorched earth policy" to paralyze life in rebel-held areas.Syrian state news agency SANA said on Thursday rebel shelling of the government-held capital Damascus killed one and injured 22 in the Amara district of the city.IDLIB PUSHSupported by Iran-backed militias and intensive Russian bombing, the Syrian army has since last month waged a new campaign to push into the heart of another rebel-held part of Syria, Idlib province in the country's northwest.Idlib is a heavily populated area where over two million people live.Rescue workers said there had been a spike in civilian casualties there in the last twenty days from stepped-up aerial strikes on residential areas, documenting 50 dead at least in that period."There have been at least six major massacres perpetrated by Russia in indiscriminate bombing of cities and towns with thousands fleeing their homes in the last two weeks," said Mustafa al Haj Yousef, the head of Idlib's Civil Defence, rescuers who work in opposition-held areas.On Wednesday air strikes hit a maternity hospital in Idlib's Ma'arat al-Nu'man city, killing five people, the Syrian American Medical Society (SAMS) charity, which supports the hospital, said.The hospital, which SAMS said delivers around 30 babies a day, had been struck three times in four days and the last strikes temporarily put the hospital out of service.Overnight, a family of seven was buried under rubble in Tel Dukan village, rescuers said.The army has been gaining ground in Idlib and the adjoining eastern Hama countryside, with scores of villages seized from rebels mainly belonging to Tahrir al Sham, a coalition of jihadist groups with mainstream Free Syrian Army (FSA) factions also engaged in the battles.