Russia’s support of Assad regime killed as ‘many as 2,000 Syrian civilians’

Civilian causalities from Russian strikes were six times worse than those from US coalition, according to new Airwars reports. 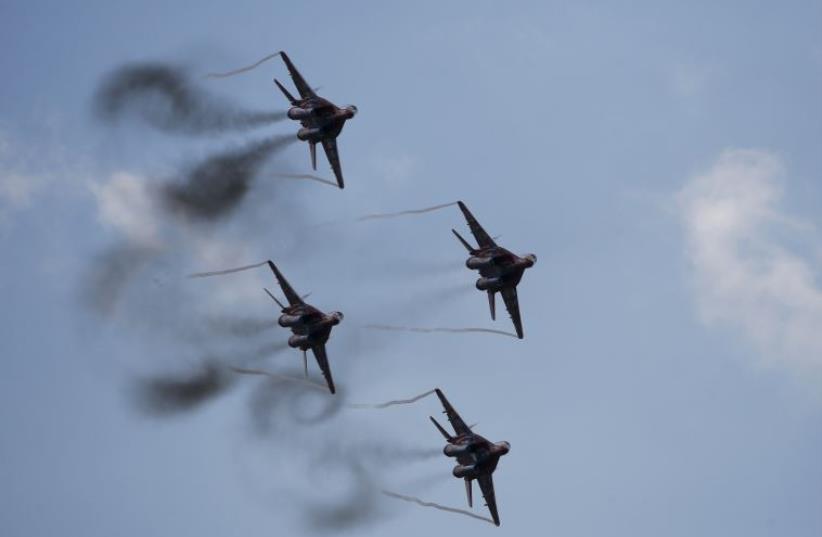 MiG-29 jet fighters of the Russian aerobatic team Strizhi (The Swifts) perform during the MAKS International Aviation and Space Salon in Zhukovsky outside Moscow, Russia, August 30, 2015
(photo credit: REUTERS)
Advertisement
Russia killed more than six times the number of civilians in the first three months of its air campaign in Syria than US led coalition jets did over the same time period, according to a report released in recent days by the monitoring organization Airwars. Between 1,098 and 1,450 non-combatants are alleged to have died in 192 separate Russian airstrikes. A combination of low-tech, imprecise munitions and deliberate disregard for civilian lives are the main causes of the higher number of deaths, researchers say.Airwars, the British non-governmental organization which compiled the figures originally formed to monitor the number of non-combatants killed by the US led coalition against the Islamic State (ISIS) in Iraq and Syria. In the past it has been highly critical of Western militaries’ failure to acknowledge instances where it says civilians were killed. Following Moscow’s surprise entrance into the conflict in late September, to bolster the crumbling regime of President Bashar Assad, data on Russian airstrikes was also compiled.Due to the similar number of sorties made by aircraft from both militaries between the end of September and December it was possible to compare the impact of airstrikes on the local population, Chris Woods, an investigative journalist covering security issues and Airwars’ director, told The Media Line. The data suggests that, “The coalition has been taking far more care not to kill civilians… (and that) Russia was killing many more civilians in a comparative number of sorties,” Woods said.As well as killing more non-combats on the ground Russian strikes have caused many more injuries, an indicator that their attacks are less precise and utilizing larger or more munitions which then catch civilians in the periphery of the blast, Woods said. “The more precise the munition the less explosives you need for the same effect and the more targeted you can be,” he explained. This is due to the prevalence of ‘dumb bombs’ in the Russian arsenal – munitions that are not precisely guided onto their target by modern technology. The Russian Airforce is “kind of where the West was in the early 90s – where precision munitions were coming in during the First Gulf War… (which is) far more lethal for civilians on the ground,” Woods said.It must also be noted that a free-fire attitude and general disregard for Syrian’s lives, compared to the US coalition’s efforts to avoid ‘civcavs,’ (civilian casualties) was as equally to blame as a lower-tech arsenal, Woods said. But in addition to recklessness rules of engagement evidence exists that Russian jets targeted civilians deliberately. “There are simply too many credible reports over time for this not to have been a deliberate policy – factories, bakeries, water treatments plants, village wells, aid convoys, warehouse, all of them heavily bombed,” Airwars’ director opined. While conceding that the US-coalition is more cautious regarding rules of engagement, Nikolai Kozhanov, a nonresident scholar at the Carnegie Moscow Center, noted that, “Russia does not conceal that it is using old equipment it inherited from the Soviet (era),” and this unfortunately is less precise. Civilian casualties are never justified but are an inevitable part of the war, and caused by both sides, Kozhanov suggested. Any notion that the Kremlin would be causing them deliberately was hard to believe, the academic said.“The Russians don’t care much about the loss of civilians – take the losses in the Chechen Wars – but there was never a case when Russians targeted civilians deliberately… in the current media coverage such facts would be used against them so it doesn’t make sense,” he argued. One factor is important to remember in all of this, Kozhanov suggested, “that Russia came to Syria not for benefit of the Syrian people – (but) to pursue its own goals.”Allegations of deliberate targeting of non-combatants have been constant enough for Amnesty International to log a number of protests with the Kremlin. These complaints have been met with flat denials by Russian officials, Neil Sammonds, a Syrian Researcher for Amnesty International, told The Media Line.“By attacking civilian areas like markets or hospitals it’s extremely likely that you are going to hit civilians as well – these are objects which should be protected in times of war,” Sammonds said, adding that Amnesty had documented repeated instances of such attacks which could add up to as many as 2,000 non-combatant fatalities. Russia is systematically conducting such attacks against opposition held territory to destroy the moral of those living there and to send the political message ‘you should give up,’ Sammonds said. Such attempts to make life untenable in an area through attacks on basic civilian infrastructure are a continuation of the Syrian government’s policy of violence towards its own population, the researcher suggested. Attacks in this vain would be consistent with the use of starvation as a weapon in certain parts of the country. It would also constitute serious offenses under international agreements relating to the conduct of warfare. “There are very strong indicators that the Russian forces have committed war crimes,” Sammonds concluded. Criticism of Russian conduct by Western leaders has been undermined by the US led coalitions refusal to acknowledge its own mistakes, Chris Woods said. “For the entire duration of the Russian engagement in Syria the coalition has not admitted killing one civilian while constantly attacking Russia for killing civilians – it’s just hypocrisy.”