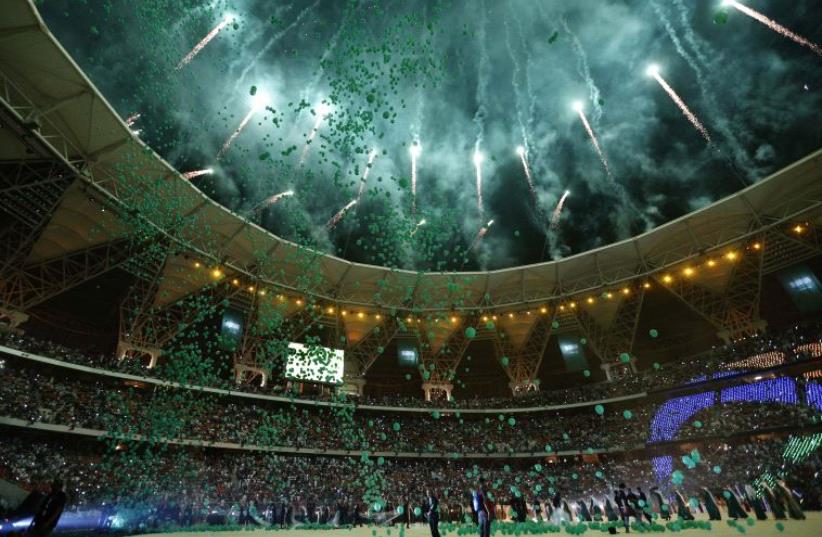 King Abdullah Sports City
(photo credit: STR / AFP)
Advertisement
Saudi Arabian officials reported on Sunday that it had successfully thwarted an ISIS-linked terrorist plot to attack up to 60,000 sports fans at a soccer stadium in the port city of Jeddah, according to Iranian state news agency PressTV. The Saudi Interior Ministry said that four suspected Islamic State operatives were arrested one day before executing a plan to bomb the King Abdullah Sports City Stadium, also known as the “Luminous Jewel,” during a UAE-Saudi FIFA World Cup qualifying match on October 11.“Daesh wants any operation that could result in the highest number of victims,” said an Interior Ministry spokesperson, using the Arabic acronym for Islamic State.According to Press TV citing Saudi security officials, a vehicle containing an estimated 400 kilograms (882 pounds) of explosive material was discovered near the stadium parking lot.“Another equally horrifying scenario would have occurred had the device exploded whilst the spectators were exiting the stadium,” the spokesman added.The blast radius of the bombing, security officials noted, would have been an estimated 1,100 meters (3,609 feet) and cover nearly 800,000 square meters (8,610,000 square feet).“Tighter security measures were taken and more troops were deployed to ensure prompt and decisive action against any suspect or suspicious activity. Greater field work resulted in the identification and arrest of the suspects one day before the match,” the Saudi spokesperson said.Saudi officials also announced that a separate plot had been foiled aimed at attacking police officers in the Saudi capital of Riyadh. London-based Arabic daily Asharq al-Awsat reported that each cell operated separately, but were both receiving instructions from ISIS in Syria. Saudi General Bassam Attiyah, an expert in combating terrorism strategies in the Ministry of Interior, said that “there are common factors among the ISIS operatives, including their residing region, education, environment... and age."He added that “in 2014, they started to get influenced by ISIS and the caliphate concept. They followed up ISIS media publications, received them passionately and spent long hours watching and analyzing them until they got convinced in the takfiri intellect.”Takfiri or takfir is a Muslim who proclaims another Muslim an apostate.