The coordination but poor training appear to be a sign of ISIS's operational model, recruiting would-be jihadists online and managing plots remotely with minimal involvement in training. 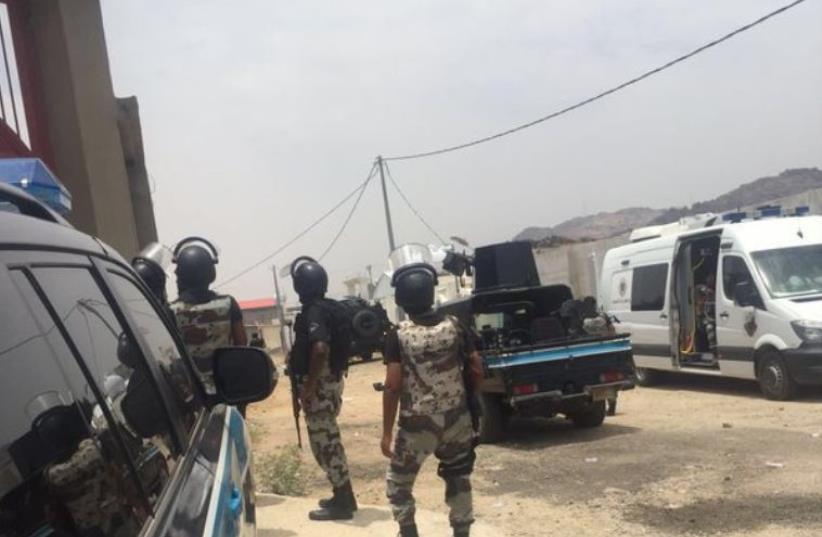 Saudi security forces during the operation to capture ISIS cell
(photo credit: ARAB MEDIA)
Advertisement
RIYADH - Technical hitches limited the death tolls in three suicide attacks in Saudi Arabia but the apparent coordination of the blasts suggests jihadis have the tools to sustain their bombing campaign.Three young Saudis detonated explosive vests near a Shi'ite mosque in Qatif last Monday, killing only themselves, while an attack by another young Saudi suicide bomber at the Prophet's mosque in Medina killed four policemen.Before dawn the same day a 34-year-old Pakistani driver had blown himself up in a car park outside the US consulate in Jeddah but only injured two security guards."Technically these people are poor. Psychologically they are very poor. Training-wise they are poor," said Mustafa Alani, an Iraqi security expert at the Jeddah-based Gulf Research Center with ties to the Saudi Interior Ministry."Out of five suicide bombers, four killed themselves for nothing."Nevertheless, that five individuals were able to build or acquire explosive vests and to plot three attacks on the same day points to a command chain and supply network that presents a formidable threat, security analysts say.The attacks were not claimed by any group although the government believes Islamic State is responsible after detaining 19 suspects linked to the five attackers.The coordination but poor training appear to be a sign of Islamic State's operational model in Saudi Arabia, recruiting would-be jihadists online and managing plots remotely with minimal involvement in training.An Islamic State recruit inside the kingdom will then seek friends or relatives to join him in an attack, while his handlers in Syria or Iraq suggest a target and help to provide explosives and instructions on how to make a bomb.That low profile makes it very difficult for the security forces to identify networks or uncover attacks before they are carried out, and Islamic State's minimal investment in operations means it has little to lose if a plot goes awry.SLEEPER CELLSUnlike during an al-Qaida campaign a decade ago there is no network of interconnected cells under a central leadership in Saudi Arabia that can be infiltrated or rolled up by the security services."They ask young people to stay in Saudi Arabia and create sleeper cells and this is a very dangerous thing because you do not know who is in a sleeper cell or who is a lone wolf," a senior Saudi security officer told Reuters last year.Traces of nitroglycerine were found at the locations of each of last week's explosions and preliminary investigations suggest the explosives were of a type used by the military.Police at present believe they came from the same source, said Interior Ministry spokesman Major General Mansour Turki."We're talking about highly organized attacks under a central command (outside Saudi Arabia) and with a chain of supply," said Alani.However, he said the lack of an in-country leadership able to carefully select and groom recruits, provide training, centralize bomb making and prepare attackers psychologically meant that many of its operations were ineffective.The attackers in Jeddah and Medina were both approached by police in car parks near their likely targets because their nervous behavior attracted suspicion. The Jeddah bomber detonated his device too far from the police to kill them.After the attack in Qatif, police found explosive packs intact, Alani said, indicating that only the detonators had exploded, killing the bombers but not causing wider damage. Turki said he was unable to confirm that some devices did not properly explode.