An exchange between Saudi Prince Turki al-Faisal and Iranian Foreign Minister Javad Zarif at an invitation-only meeting underlined the hostility between the two Gulf rivals. 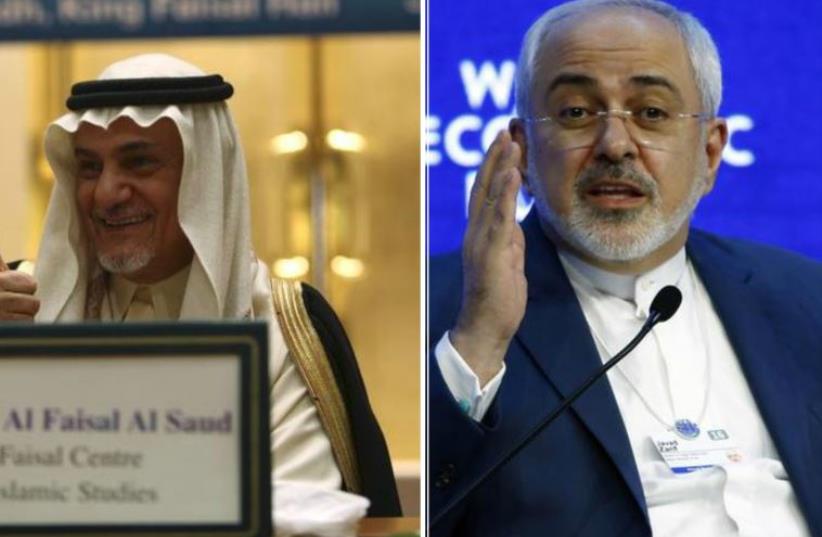 Saudi Prince Turki al-Faisal and Iranian Foreign Minister Javad Zarif.
(photo credit: REUTERS)
Advertisement
DAVOS, Switzerland - Senior Saudi and Iranian figures clashed behind closed doors at a private meeting convened by the World Economic Forum in Davos this week to try to promote peace in Syria, participants said.The barbed exchange between Saudi Prince Turki al-Faisal and Iranian Foreign Minister Javad Zarif at an invitation-only meeting on Wednesday underlined the hostility between the two Gulf rivals, who are waging proxy wars in Syria, Yemen and Iraq.Riyadh broke off diplomatic relations and cut off trade and transport ties with Tehran two weeks ago after protesters stormed the Saudi embassy in Iran. The protests erupted following the Saudi execution of a leading Shi'ite cleric that outraged predominantly Shi'ite Iranians.The standoff highlights some of the reasons US-Russian-backed peace talks on Syria may not open as planned in Geneva next week. There is no agreement on who should represent opponents of the Syrian government, and Riyadh-backed rebels are demanding that Russia first stop air strikes in Syria.An official photographer snapped Faisal and Zarif shaking hands outside the room. The picture was not distributed and any warmth evaporated when they sat around the table with UN and other senior officials."It was a dialog of the deaf," said one participant, who asked not to be identified because of the confidentiality of the session.Zarif denied any secret meeting with Prince Turki, a former head of Saudi intelligence and ambassador to the United States. Asked at a news conference the same day whether he would meet any Saudi officials in Davos, he said: "There won't be any secret meeting."Prince Turki confirmed to Reuters that he had attended the session with Zarif and others but declined comment on what was said, citing the off-the-record ground rules of the meeting.UN special envoy on Syria Staffan de Mistura, former UN Secretary-General Kofi Annan, former Arab League Secretary-General Amr Moussa of Egypt, the foreign ministers of Italy and Austria and officials from Turkey and several other Western nations were also around the table.SECTARIAN STRIFEDe Mistura opened the meeting by saying the time was ripe for the Geneva peace talks because outside powers all wanted a political solution to the five-year-old civil war in Syria, the participants said.However, several speakers questioned Russia's motives for intervening in the conflict since September with air strikes in support of President Bashar al-Assad. They cast doubt on whether Moscow and Tehran wanted any deal that would involve Assad's eventual departure.Zarif said Iran supported a political solution and had set out a four-point peace plan when it was finally invited to join international diplomacy on Syria last year. It had been excluded for years at US and Saudi insistence.Without naming any country, he took a veiled swipe at Riyadh by condemning those, he said, who fanned and exploited sectarian differences between Sunni and Shi'ite Muslims across the region.At his news conference, Zarif accused Saudi Arabia of having spent millions of dollars to lobby the US Congress against an international deal on Iran's nuclear program. An agreement with Iran led to the lifting of UN sanctions on the country this week.He said Riyadh had panicked after the embassy attack and the Saudis needed to "come to their senses."Prince Turki hit back in the closed session, blasting Iran's role in the Syria conflict, the participants said. Quoting an Arabic saying, he told Zarif: "I really like what you say but when I look at what you do, I wonder."Prince Turki, the 70-year-old youngest son of the late King Faisal, accused Iran of having 10,000 fighters on the ground in Syria supporting Assad, participants said. He described the Syrian leader as a "terrorist killing his own people" who was directly kept in power by Tehran, the participants said.One participant said the prince's remarks were sharper than expected and shocked some of those attending the meeting.While declining to comment on the exchange, Prince Turki told Reuters the commander of the Iranian Revolutionary Guards had boasted publicly that Iran had 120,000 fighters in Arab countries.Iran has acknowledged that officers of its Revolutionary Guards have been killed in Syria, but it denies having a large military presence in the country or participating directly in combat operations.Officials close to Damascus and familiar with military developments have said that hundreds of Iranian fighters have joined the ground war in Syria since Russia began its air strikes last September, many of them deployed near Aleppo.A Middle East diplomat said the Iranian presence was closer to 2,000 Revolutionary Guards, but they were augmented by several thousand Shi'ite volunteers from countries such as Pakistan, Afghanistan and Iraq who had received military training in Iran.Zarif did not respond to Prince Turki's attack in the meeting and the rest of the session was inconclusive. UN envoy de Mistura lamented that "this is the third year we are talking about Syria and not getting anywhere," one participant said.He said the Europeans at the table only talked about the humanitarian situation and the refugee crisis and how to stop refugees reaching Europe.