The impoverished Arab country has been devastated by the war, which has killed more than 10,000 people and sparked a cholera outbreak among 300,000 people. 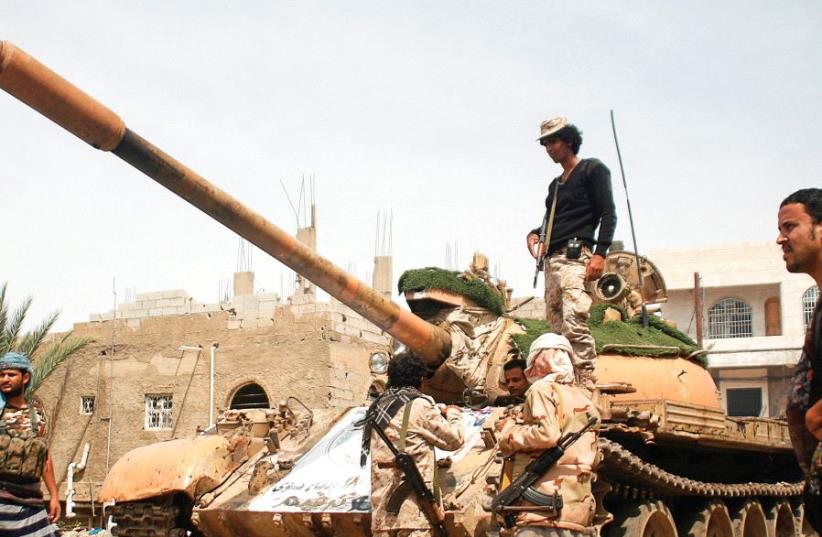 PRO-GOVERNMENT FIGHTERS gather next to a tank they use in the fighting against Houthi fighters in the southwestern city of Taiz in Yemen.
(photo credit: REUTERS)
Advertisement
DUBAI - At least 20 Yemeni civilians were killed and many others were wounded when a Saudi-led coalition air strike hit a village in the south, officials from the armed Houthi movement and the government said on Wednesday.The UN said the victims of Tuesday's bombing, which hit al-Atera village in Taiz province where fighting between Yemen's two warring sides has intensified, were internally displaced people (IDPs).Yemen's internationally recognized government confirmed that around 20 people were killed, including women and children. It gave no further details on the attack.Yemen's human rights minister, Mohammed Askar, called for a government investigation into what he described as an "unfortunate incident." while Houthi spokesman Mohammed Abdul-Salam condemned it as a "monstrous crime."Shabia Mantoo, United Nations High Commissioner for Refugees (UNHCR) spokesman in Yemen, said most of those killed were believed to be from the same family.Government forces backed by the coalition have been fighting to seize a major military base in the area for several months. The Saudi-led coalition was formed in 2015 to fight the Iran-allied Houthis after they overran the capital Sanaa.Tuesday's attack was the latest in a series of coalition bombings that have hit schools, hospitals, markets and private homes across northern Yemen.The impoverished Arab country has been devastated by the war, which has killed more than 10,000 people and sparked a cholera outbreak among 300,000 people.Thousands of people have been displaced and more than a million people have been forced to flee their homes nationwide, according to the UN.