The document was given to the AP by an unnamed diplomat whose work has focused on Iran’s nuclear program for more than a decade. 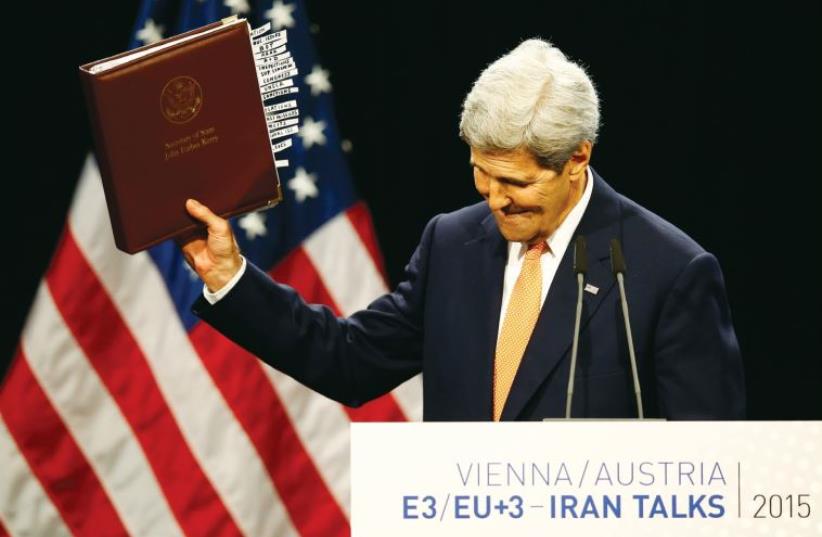 US secretary of State John Kerry reacts as he delivers a statement on the Iran talks deal at the Vienna International Center in Vienna, Austria, on July 14.
(photo credit: LEONHARD FOEGER / REUTERS)
Advertisement
In what reportedly is the only part of last year’s Iran nuclear deal not made public, the Islamic Republic will be able to resume key nuclear production in just over a decade.An Associated Press article published Monday said the news agency had obtained a document saying that when the restrictions are lifted, Iran will need only six months to build a bomb — lower than the current estimates of a year.The document was given to the AP by an unnamed diplomat whose work has focused on Iran’s nuclear program for more than a decade. Its authenticity was confirmed by another diplomat.The diplomat who shared the document said it was an add-on agreement to the main deal that is formally separate but actually is an integral part of the deal. Iran and the six countries that negotiated the deal, including the United States, approved the add-on.While some of the constraints extend for 15 years, documents in the public domain are vague about what happens after the first 10 years of the agreement, according to the AP.The document obtained by the AP says that as of January 2027, Iran can start replacing its mainstay centrifuges with thousands of advanced machines. The new machines will enable Iran to enrich at more than twice the rate as it is now, according to the AP.“We have ensured that Iran’s breakout time comes down gradually after year 10 in large part because of restrictions on its uranium stockpile until year 15,” an unidentified diplomat told the AP. “As for breakout times after the initial 10 years of the deal, the breakout time does not go off a cliff nor do we believe that it would be immediately cut in half, to six months.”The Joint Comprehensive Plan of Action, or JCPOA, reached on July 14, 2015, lifts economic sanctions in exchange for Iran curbing its nuclear program. Prime Minister Benjamin Netanyahu of Israel and many in the American Jewish community opposed the deal.