Amad Khatami claims if nuclear deal does not pass, Obama will fall into crisis. 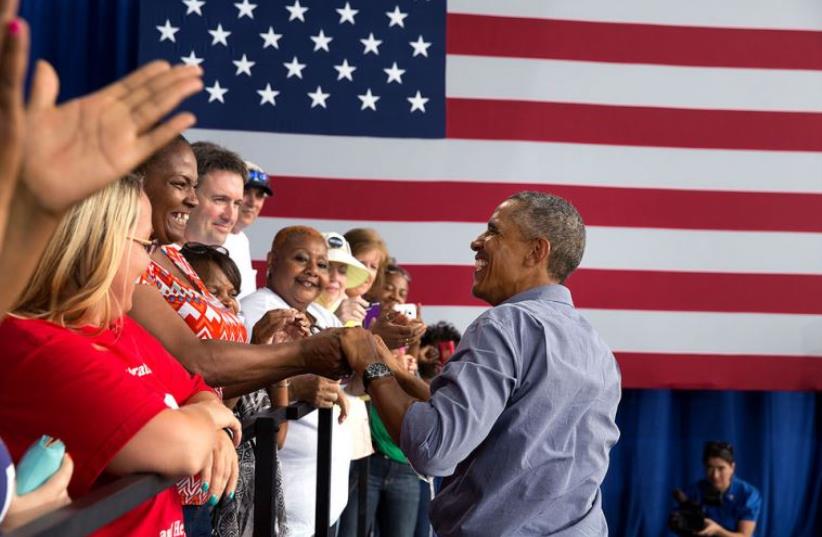 US President Barack Obama greets supporters in Milwaukee
(photo credit: OFFICIAL WHITE HOUSE PHOTO / PETE SOUZA)
Advertisement
US President Barack Obama's motives in the creation of the nuclear agreement with Iran were questioned this weekend by a prominent Iranian cleric, Fars news agency reported. Religious leader Amad Khatami, addressing worshipers at Tehran University, expressed how the US President is seeking to become a "hero of his nation through a nuclear deal with Iran, and he will see himself in bad crisis if Washington fails to clinch the agreement." "He wants his party to be elected again and if this deal with Iran is signed the Democratic party will have a better chance of victory," Khatami was quoted as saying.
He expressed doubts over Obama's nuclear policy with Iran, explaining how the US president first promoted "Iranophobia" throughout the world with allegations that Iran is seeking nuclear weapons, and claimed the US was taking a firm stand against  Iran through the promotion of this deal. "The US needs an agreement with Iran," he continued.
Iran and six world powers are currently seeking to overcome remaining differences with a self-imposed June 30 deadline looming to end a 12-year standoff.A framework accord was reached between Iran, the United States, France, Britain, Germany, Russia and China on April 2, but several major substantive disputes remain to be resolved, including access for UN nuclear inspectors to Iranian military sites and the pace and timing of sanctions relief for Tehran.Israel has argued that the emerging deal with Iran is a bad deal that will enable the Islamic republic to remain a nuclear threshold state and that it will allow Tehran to pursue nuclear weapons when it expires in ten years time.