You know al-Qaeda and the Nusra Front , but what about Ahrar al-Sham? 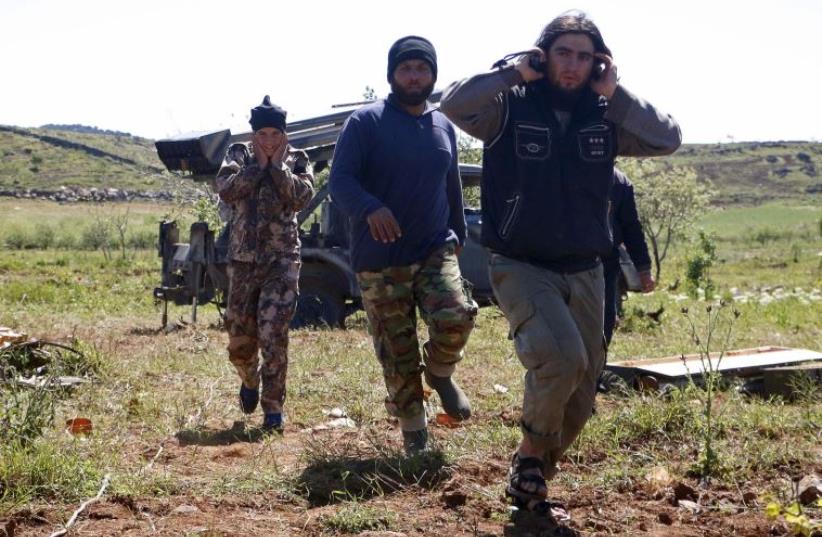 Rebel fighters from the Ahrar al-Sham Islamic Movement cover their ears during the launch of grad rockets from Idlib countryside towards forces loyal to Syria's President Bashar al-Assad, who are stationed at Jureen town in al-Ghab plain in the Hama countryside April 24, 2015.
(photo credit: REUTERS)
Advertisement
Syria’s devastating civil war is notoriously complex, involving hundreds of factions fighting on the ground and dozens of outside actors seeking to influence the result from a safe distance. At its simplest level the conflict can be viewed as a sectarian clash between the two sides of Islam’s great division – Sunni and Shiite.  While five years of fighting has brought familiarity to many of the main combatant organization to observers around the world, two significant forces -- the Sunni Ahrar Al-Sham and Shiite Hazara -- are far less known than their impact on the conflict arguably warrants.The Islamic State (ISIS); Jabhat Al-Nusra (the Al-Nusra Front) and its parent al-Qaeda have received their share of attention from both world (including Western) media outlets and warplanes sent to the region by the United States and Russia to provide cover and support for their rivals on the ground. Less well known but almost as important on the battlefields of Syria is Ahrar Al-Sham – the “Free Men of the Levant.”
Formed by Islamist prisoners released from Syrian jails in 2011, Ahrar Al-Sham once held radical fundamentalist beliefs similar to those espoused by Jabhat Al-Nusra, but following an explosion in 2014 that wiped out much of its senior leadership, the group appeared to moderate. Despite predictions after the blast that Ahrar Al-Sham would become extinct, the group instead recovered and grew. “We can divide the groups based on how radical they are. The most radical, ISIS, less radical, Jabhat Al-Nusra, and the moderate radical Ahrar Al-Sham,” Eyal Zisser, a professor of Middle Eastern history at Tel Aviv University told The Media Line. Designated by several countries – but not the United States -- as a terrorist organization, Ahrar Al-Sham spans the ideological gap between the al-Qaeda-affiliate Al-Nusra Front and the disorganized collection of rebel groups that make up the so-called “moderate” opposition to the Syrian regime of President Bashar Assad. The group openly identifies with the fundamentalist Salafist ideology, but tries to appear not to be hostile to the West, as evidenced by acts such as publishing an opinion piece in the Washington Post. Located mainly in the north of the country, Ahrar Al-Sham has links to several foreign backers. “They are an important player, one of the leading Sunni groups in Syria… supported by the Saudis and the Turks,” Zisser said, adding that Qatar also funded the organization. How closely linked Ahrar Al-Sham is to Jabat Al-Nusra remains unclear. On multiple occasions the two have cooperated during operations on the ground, but this is common among Sunni rebel groups. Rumors circulated at the start of 2016 alleging that Al-Nusra attempted to negotiate an amalgamation with Ahrar Al-Sham but that the collapse of talks resulted in fighting between the two factions. On the Shiite side of the fence and based in Afghanistan stands Hazara.
To counter the weight of armed Sunni groups fighting to bring down his government, President Bashar Assad long ago began relying on militias of his own to supplement the devastated Syrian army. Some of these were home grown, recruited from Alawite and Christian communities loyal to the president, while many others came from abroad: Shiites from Iraq and Hizbullah from Lebanon. Some came to Syria from as far away as Afghanistan.The Hazaras are Afghanistan’s third largest ethnic group and the majority of the country’s Shiite population (about 80% of Afghanis are Sunni Muslims). Tracing their lineage back to the Mongol warriors of Genghis Khan, Hazaras’ facial features are more central-Asian than other Afghanis, a visible indication that sets them apart from the predominantly Arab foreign fighters in Syria. Persecuted in the past by the Taliban and other Sunni groups, some Shiite Hazara appear to have chosen to join in the sectarian power struggle sweeping the Middle East. Others living as refugees in Iran are being forcibly recruited to join in the violence or face deportation according to a report issued by Human Rights Watch in January.There are hundreds of thousands of Afghans living in Iran, many of whom could be tempted by the promise of money or a long term visa for themselves or their family, Alam Saleh, a lecturer in Middle Eastern politics at the University of Exeter, told The Media Line. In exchange for such rewards, an unknown number of Hazara men have been recruited by the Iranian government to fight in Syria.A number of social media images have allegedly depicted fighters from the “Fatemioun Brigade,” a unit of Hazara soldiers commanded by senior officers from Iran’s Republican Guard.But there is one big advantage the Shiite groups have over their Sunni rivals. So many foreign powers are controlling proxies on Syria’s battlefields and throwing money around to influence them that, “they have created for the first time this sort of professional mercenary who is fighting on behalf of regional powers’ interests,” Saleh said. He stressed such fighters were “professional” only in that money was their motivating factor rather than that they were particularly well trained. Many are “simply poor people,” he suggested.This has created a fragmentation among the rebel groups due to the number of different Sunni states involved “They’re leadership is much more fragmented – you have Turkey, Qatar, Saudi Arabia, those that are independent and of course ISIS,” Saleh said. Not so with the Shiites.“They are more coherent, they all know what they are doing - fighting to save Bashar Assad.” For more stories from the Media line