Minister warns of increased Iranian presence in post-war Syria, says cooperation with Egypt "stronger than ever." 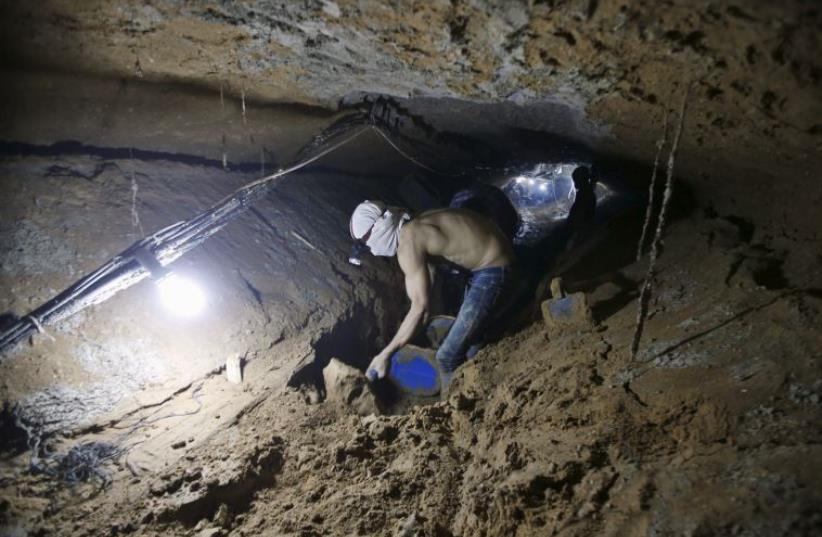 A Palestinian worker repairs a smuggling tunnel after it was flooded by Egyptian security forces, beneath the border between Egypt and southern Gaza Strip
(photo credit: REUTERS)
Advertisement
Energy Minister Yuval Steinitz said Saturday that Egyptian president Abdel Fattah al-Sisi ordered the flooding of several Hamas tunnels linking Egypt to the Gaza Strip, to a certain extent, "due to Israel's request."The minister affirmed that security cooperation between Israel and Egypt is "better than ever," and asserted that "flooding is a good solution" for the challenge of tackling Hamas' intricate tunnel system used for smuggling purposes. Last year, Egyptian forces began to flood tunnels dug beneath the Gaza-Egypt border in an effort to curb the use of the underground passages used to bring in an estimated 30 percent of all goods that reach Gaza. Overnight Friday, Egypt flooded 10 tunnels, using pipes to pump water from the Mediterranean Sea and bring about their collapse. An additional tunnel was exposed Friday, presumed to have been successfully utilized by Hamas to smuggle weaponry, building material, and rocket part components into the Strip.Despite continued construction and building of its tunnel system, Hamas has maintained over the past week its stance that "We do not want an escalation of violence. We do not want war, and have no intention of engaging in one in the near future. From our point of view, this possibility is off the table."Speaking at an event in Beersheba, Steinitz also touched upon Syria and the Iranian threat. He said that increased Iranian presence in Syria would pose a serious strategic threat to Israel, and warned that the latest developments in Syria may "bring about the transformation of Syria into an extension of Iran - with increased Iranian military and intelligence presence" on Israel's northern border. Israel must turn to its strategic allies - particularly the United States - Steinitz said, in order to prevent increased Iranian presence in the "new Syria" that would arise once the civil war ceases.