By REUTERS
NOVEMBER 23, 2011 14:34
Egyptian cloud 311
(photo credit: REUTERS)
Advertisement
CAIRO - Street clashes rumbled on in Cairo on Wednesday as protesters derided a deal struck between Egypt's ruling generals and mostly Islamist parties for a faster transfer to civilian rule.The death toll in five days of violence climbed to 37 by a Reuters count after a man was killed in the city of Alexandria. Hardcore protesters battled police through the night in Cairo. 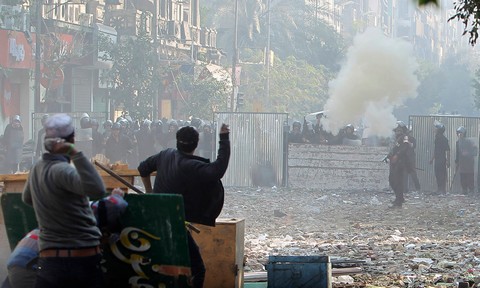 The Health Ministry said 32 people had been killed and 2,000 wounded in disturbances across the country of 80 million.Field Marshal Mohamed Hussein Tantawi, head of the military council that has run Egypt since Hosni Mubarak fell on Feb. 11, promised on Tuesday that a civilian president would be elected in June, about six months sooner than the army had planned.RELATED:
US condemns 'deplorable' violence in Egypt
Egyptian Islamists divided over protests"Leave, leave," responded crowds in Cairo's Tahrir Square. "The people want to topple the marshal."The military had originally pledged to return to barracks within six months of Mubarak's removal. Its apparent reluctance to relinquish its power and privilege has fuelled frustration among Egyptians who feared their revolution had changed nothing. 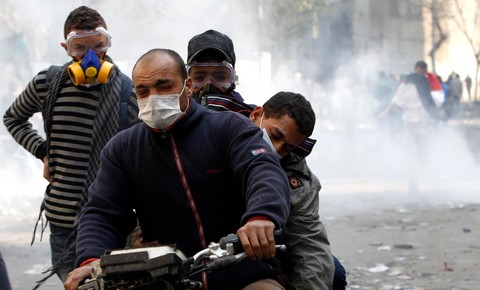 Tantawi, who was Mubarak's defense minister for two decades, adjusted the schedule after generals met politicians, including leaders of the once-banned Muslim Brotherhood, which is eager to turn decades of grassroots endeavour into electoral success.A parliamentary election, billed as Egypt's first free vote in decades, will start on Monday as planned, Tantawi confirmed.Voting for the upper and lower houses will only be completed in March under a staggered, complex process. Parliament will then pick an assembly to draw up a new constitution, an exercise which the Brotherhood and its rivals are keen to influence. 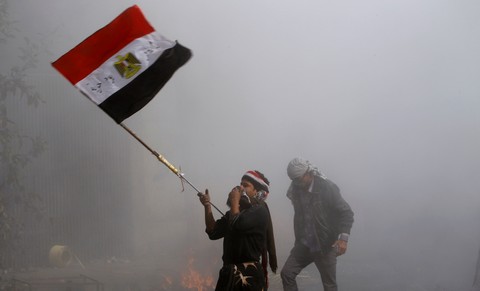 Tantawi angered many youthful demonstrators in Cairo's Tahrir Square and other cities by suggesting a referendum on whether military rule should end earlier, which they viewed as a ploy to appeal to the many Egyptians who fear further upheaval.Skirmishes between stone-throwing protesters and riot police firing tear gas, pellets and rubber bullets erupted intermittently around the Interior Ministry near Tahrir."As soon as daylight broke they started shooting, because they could see us," said Tareq Zaki, 32, a furniture maker.Police have denied using live ammunition but most of the 36 dead in five days of violence had bullet wounds, medics say.The streets were strewn with surgical masks protesters use to ward off tear gas. Ambulances ferried the wounded away.In Tahrir, where hundreds of protesters camped out overnight in tents or in the open, people collected garbage in bags or burned it in small piles. Others passed around food.The Muslim Brotherhood, which helped organise a big protest on Friday but stayed out of subsequent demonstrations, seems willing to compromise with the military in the interest of securing a substantial voice in the new parliament.Some other Islamist and liberal parties, as well as three out of more than 10 declared presidential candidates, also took part in Tuesday's crisis talks with the military council.The military has so far escaped direct public criticism from world governments, with many echoing the United States, which has deplored the violence and called for elections to go ahead.UN human rights chief Navi Pillay called on Wednesday for an independent investigation into violence in Egypt and said she deplored the killing of protesters by military and security forces, which was inflaming the situation."I urge the Egyptian authorities to end the clearly excessive use of force against protesters in Tahrir Square and elsewhere in the country, including the apparent improper use of teargas, rubber bullets and live ammunition," Pillay said in a statement.She added that "the actions of the military and security forces, instead of improving security and helping Egypt's difficult transition to democracy, have once again simply served to inflame the situation"."There should be a prompt, impartial and independent investigation, and accountability for those found responsible for the abuses that have taken place should be ensured."