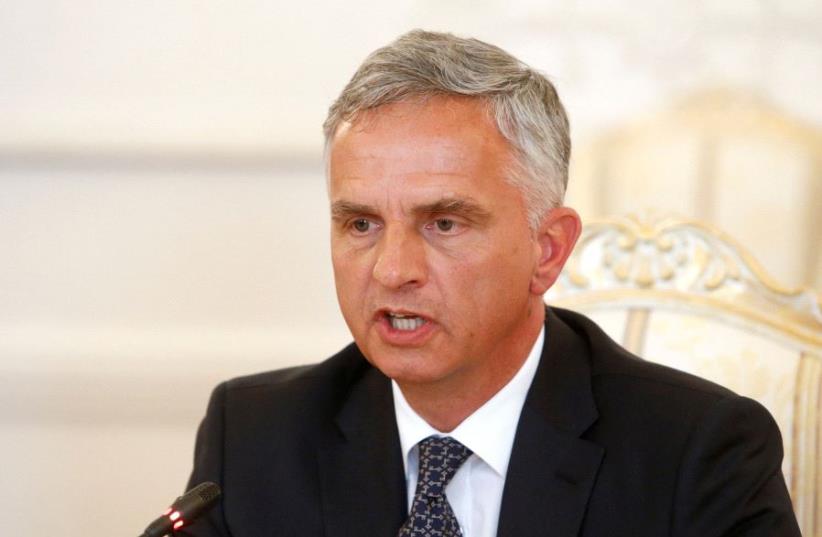 Didier Burkhalter
(photo credit: REUTERS)
Advertisement
Switzerland’s Foreign Minister Didier Burkhalter’s meetings with the Jihadist organization Hamas have catapulted his policies into a critical spotlight in the central European country.According to the Swiss daily Blick on Sunday: “The foreign ministry calls for Western dialogue with Hamas. For this reason, Bern helps make the terrorist organization [Hamas] respectable, say critics.”The conservative Swiss People’s Party deputy and foreign policy expert, Alfred Heer, told the daily it is “unbelievable that the Federal Council’s Burkhalter does not finally end support of Hamas from the EDA [Federal Department of Foreign Affairs].”Heer said the foreign minister should, on the holiday of Passover, give consideration as to why Switzerland supports an organization whose goal is the destruction of Israel.Jacob Keidar, Israel’s ambassador to Switzerland, told The Jerusalem Post on Wednesday: “We have been conveying our views concerning Hamas to the Swiss government on a constant basis and we have been trying to persuade them to adopt our views.”Israel’s government, the European Union and the US classify Hezbollah as a terrorist organization. Switzerland is not a member of the EU and has vehemently opposed adopting terrorist designations for Hamas and the Lebanese group Hezbollah.Jonathan Kreutner, general- secretary of the Swiss Jewish community, told the Post on Wednesday: “Hamas is included on the EU’s terrorism list.We are more than skeptical about whether contact with Hamas is productive. We have always said that.”Burkhalter, who is from The Liberals party, is widely considered as unfriendly toward Israel.Yves Kugelmann, the editorin- chief of the Swiss-Jewish magazine Tachles, told the Post: “It remains more than doubtful whether this is the right way at this time for conflict resolution and whether the approach was agreed to with the other parties in the conflict.”In December, the Swiss government and a Finnish NGO spent almost $85,000 to host a workshop in Geneva to unify Hamas with the Ramallah- based Palestinian Fatah party.In 2012, the National Palace (Bundeshaus), which houses the Swiss parliament, hosted Hamas spokesman Mushir al-Masri. Speaking from Bern with the Post at the time, Ambassador ad interim (chargé d’affaires) Shalom Cohen said: “We were not happy with this development. We shared our view with the local authorities.It was a big mistake to invite a member of Hamas, which calls for the destruction of Israel.”He added that Hamas is a “terrorist organization” and is recognized as such by the Middle East Quartet and the international community. “It is counterproductive and gave them [Hamas] legitimacy to continue their terrorist activities [and] to continue to work on their basic ideology: the destruction of Israel,” Cohen said.Burkhalter’s ministry has been embroiled in a separate anti-Israel scandal involving funds for NGOs that allegedly call for boycotts against Israel and express antisemitic aims.“Switzerland finances in different ways organizations in Israel and the Palestinian territories that call for the annihilation of Israel and for the death of Jews,” Basler Zeitung senior editor Dominik Feusi wrote in February.Since, 2013, the Swiss government has allegedly funneled nearly $700,000 to a human rights office in Ramallah that seeks to cover up the antisemitic work of its partner NGOs.Pierre-Alain Eltschinge, a spokesman for the EDA, told the Post on Thursday, "In line with its neutrality, its humanitarian tradition and its commitment to provide good offices, Switzerland promotes dialogue between conflict parties to facilitate the development of political solutions. That is why Switzerland also maintains contacts with Hamas. Switzerland keeps the Israeli government and the Palestinian Authority informed about its contacts with Hamas."He added, Switzerland does not apply the EU sanctions regime and does not designate Hamas as a terrorist organization in a national list. Switzerland has specifically banned Al Qaida and the Islamic State (and related organizations) as terrorist organisations in a federal law."When asked about the Hamas charter, the spokesman said: "Switzerland deems it of crucial importance to uphold the remembrance of the Holocaust and currently chairs the International Holocaust Remembrance Alliance.  Switzerland condemns incitement to hatred and violence, anti-Semitism and racism in any form. Switzerland therefore strongly disapproves of the content of the Hamas charter."