Switzerland to probe alleged offer of diplomatic aid to PLO

Did a pact between the PLO and Switzerland interfere with an investigation into a bomb attack on a Swissair plane in 1970 that killed 47 people? 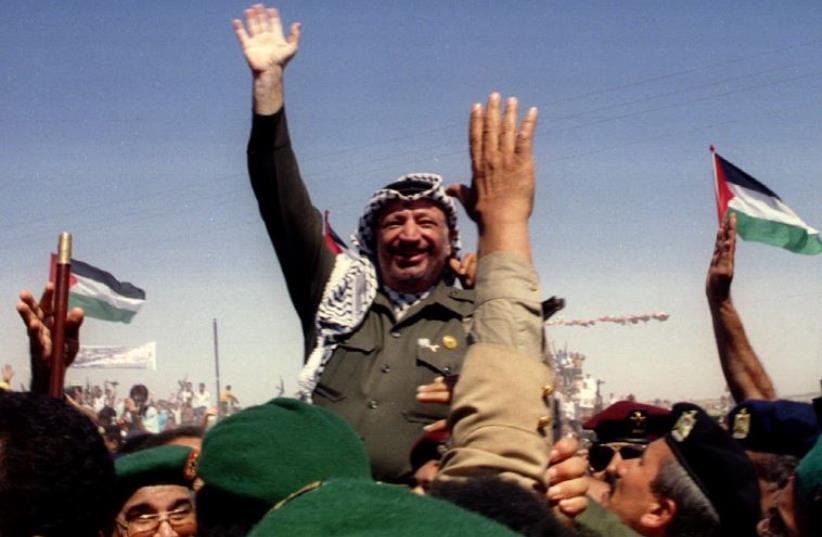 Palestine Liberation Organization chairman Yasser Arafat waves as he is briefly lifted on the shoulders of Palestinian police moments after entering the Gaza Strip in 1994
(photo credit: REUTERS)
Advertisement
Switzerland is looking into whether a former government minister struck a secret deal offering diplomatic assistance to the Palestine Liberation Organization in 1970 in exchange for the Arab group stopping attacks on Swiss targets.The allegation emerged this year in a book, Swiss Terror Years, which has also raised questions whether a pact between the PLO and Switzerland interfered with an investigation into a bomb attack on a Swissair plane in 1970 that killed 47 people.No one was ever charged with that bombing.The foreign ministry said on Friday that a task force including police, justice and military officials would try to answer not only whether neutral Switzerland cut the deal with the PLO in September 1970, but whether the investigation into the Swissair bombing had been thorough.In his book, Swiss journalist Marcel Gyr wrote that former Foreign Minister Pierre Graber, who died in 2003 at age 94, secretly contacted the PLO after several attacks including the killing of an Israeli airline pilot in 1969 at Zurich airport and a September 1970 incident in which 300 hostages on three jets were forced to land in Jordan.Gyr wrote that Graber reached an agreement with the PLO: In exchange for the group refraining from further attacks on Swiss targets, Switzerland would provide the PLO with diplomatic assistance in Geneva, a base of the United Nations.Gyr said his research also unearthed legitimate questions about whether the Swiss justice system swept its investigation of the Swissair bombing under the rug in the wake of the PLO pact.Since his book's publication, some involved with the government during the period have expressed doubts about his conclusions.Gyr stands by his research, which he said included interviews with people involved with the matter at the time, such as former parliament minister Jean Ziegler, who said he helped Graber contact PLO leaders.Gyr said he was pleased the present Swiss government had opted to tackle the matter after nearly five decades."I trust that the investigation goes really deep and brings the truth at light," he said. "My only concerns are that the working group seems to focus on written documents in the official archives. But it was a secret deal. So I hope the working group contacts the last oral sources as well.The working group pledged to fulfill a demand by a Swiss parliamentary commission this month that the investigation be completed and a report issued by the end of April.Parliament also said it expects the government to give the task force unfettered access to classified files from the era.The PLO was founded in 1964 with the purpose of the "liberation of Palestine" through armed struggle. It is now recognized as the "sole legitimate representative of the Palestinian people" by over 100 states with which it holds diplomatic relations, and has enjoyed observer status at the United Nations since 1974.In 1993 the PLO recognized Israel's right to exist in peace and rejected "violence and terrorism." In response, Israel officially recognized the PLO as the representative of the Palestinian people.