$1 billion in amphetamines seized in Italy belonged to Syria, Hezbollah

Captagon is popular in the Middle East, and widespread in war-torn areas such as Syria, where conflict has fueled demand and created opportunities for producers. 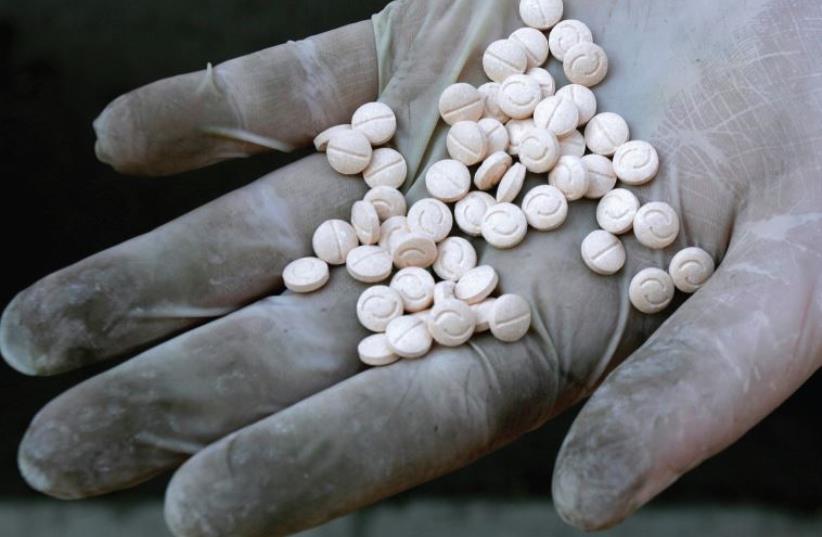 A customs officers displays confiscated Captagon pills
(photo credit: REUTERS)
Advertisement
Italy's financial crimes unit detailed a large-scale drug trade believed to be originating out of Syria, according to an exclusive BBC report.During the summer, the Italian authorities said they had seized about 14 tonnes (15.4 US tons) of the amphetamine Captagon arriving from Syria – about 84 million pills, worth around $1 billion – in what they described as the world’s single largest operation of its kind.The Italian police initially thought that Islamic State (ISIS) was behind the transaction. But after digging further, they pointed the finger at the regime of Syrian President Bashar Assad and his close Lebanese ally Hezbollah.BBC Middle East correspondent Quentin Sommerville stated that drugs are a major source of funding for Syria and the Lebanese terrorist group. He added that not only was the drug bust in Italy linked to Syria and Hezbollah, but a "wave of others across the world" has also been associated with the groups.Used in the 1960s to treat depression and the sleep disorder narcolepsy, Captagon is one of several brand names for fenethylline hydrochloride, a drug compound belonging to a family of amphetamines that can inhibit fear and ward off tiredness.Captagon is popular in the Middle East, and widespread in war-torn areas such as Syria, where conflict has fueled demand and created opportunities for producers.Production was initially concentrated in Lebanon, and ISIS sells it to finance its activities, the Police said in a statement.It said Captagon was known as the “drug of the Jihad” after being found in terrorist hideouts, including one used by the Islamists who killed 90 people at the Bataclan theater in Paris in 2015.Italian authorities believe the coronavirus lockdown across Europe has hindered the production and distribution of synthetic drugs, forcing traffickers to organize shipments from Syria, where these activities have not slowed down.In a raid two weeks prior to this major bust, Italian police seized 2,800 kg. of hashish and a million Captagon pills in the port of Salerno. The shipment was hidden among counterfeit clothing items.Reuters contributed to this report.