Syrian army on precipice of retaking historic Palmyra from ISIS

The Syrian Observatory for Human Rights described the Syrian army offensive as the heaviest assault yet in a three-week campaign. 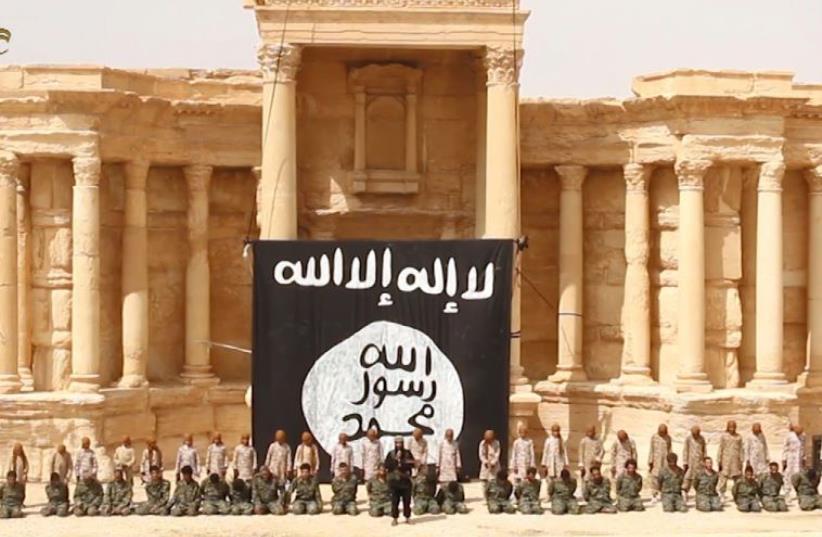 ISIS executes Syrian soldiers in ruins of ampitheater in Palmyra
(photo credit: WELAYAT HOMS / AFP)
Advertisement
Syrian government forces advanced into Palmyra on several fronts on Saturday with support from air strikes and artillery bombardment, state media and a monitoring group said, and live television showed waves of explosions inside the city.The Syrian Observatory for Human Rights described it as the heaviest assault yet in a three-week campaign by the Syrian army and allied militia fighters to recapture the desert city from Islamic State fighters.Observatory director Rami Abdulrahman said Syrian soldiers and allied militias had taken control of one-third of Palmyra, mainly in the west and north, including parts of its ancient Roman-era ruins. Soldiers were also fighting on a southern front, he said.State-run television also said the army was advancing inside Palmyra, recapturing several neighborhoods.Television footage from the slopes of the medieval citadel, which was seized by the army on Friday and overlooks the city, showed tanks and armored vehicles firing into Palmyra.Waves of explosions hit buildings, and smoke could be seen rising from many locations. Earlier, the Observatory said that Islamic State militants had launched counter-attacks - including car bombings - against advancing soldiers.The recapture of Palmyra, which the Islamist group seized in May 2015, would mark the biggest reversal for Islamic State in Syria since Russia's intervention turned the tide of the five-year conflict in President Bashar al-Assad's favor.The group, and al Qaida's Syrian branch the Nusra Front, is excluded from a month-long cessation of hostilities agreement that has brought a lull in fighting between the government and rebels battling Assad in western Syria.The limited truce has allowed peace talks to resume in Geneva. But progress has been slow, with the government and its opponents disagreeing fundamentally on the terms of such a transition, including whether Assad must leave power.RUSSIAN SUPPORTRussia has reduced its military presence in Syria but has strongly supported the Palmyra offensive, carrying out dozens of air strikes this week and acknowledging that a Russian special forces officer was killed in combat near the city.Palmyra had a population of 50,000 according to a census more than 10 years ago. Those numbers were swelled hugely by an influx of people displaced by Syria's conflict, which has raged since 2011, but most fled when Islamic State took over.Recapturing the city would open up eastern Syria, where Islamic State controls most of the Euphrates Valley provinces of Deir al-Zor and Raqqa, to the army."Our heroic forces are continuing to advance until we liberate every inch of this pure land," a soldier told state-run television in a broadcast from slopes of the citadel, which overlooks the city's monumental ruins.In August, Islamic State fighters dynamited two ancient buildings, the temples of Bel and Baal Shamin, which had stood as cultural landmarks in Palmyra for nearly two millennia. The United Nations described their destruction as a war crime.Television footage in the last 24 hours from the edge of Palmyra has shown some of the city's structures and famed colonnades still standing, although the extent of any damage was impossible to assess.Syrian officials said last year they had moved hundreds of ancient statues to safe locations before the city was overrun by Islamic State.