The Syrian army overran a key town in the northern province of Aleppo on Tuesday. 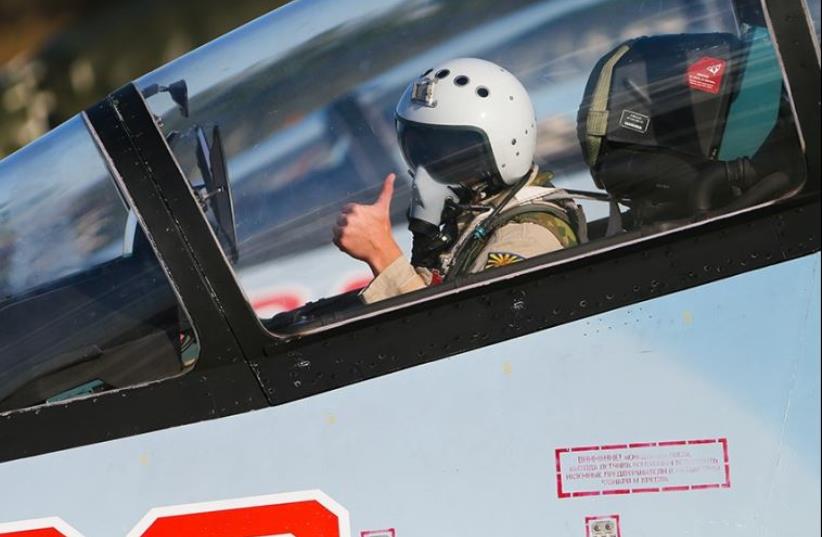 A Russian pilot gives the thumbs-up sign on an airbase in Syria
(photo credit: RUSSIAN ARMED FORCES)
Advertisement
The Syrian armed forces, which hold almost twice as much territory as the Syrian opposition forces do, have more bargaining chips at the ongoing intra-Syrians talks in Geneva, Switzerland, analysts said.United Nations (UN) Special Envoy for Syria Staffan de Mistura, who has been attempting to broker peace for the country at war since 2011, announced the "official" beginning of the Geneva Intra-Syrian talks on Monday.The Syrian army overran a key town in the northern province of Aleppo on Tuesday, close to breaking a siege on two Shiite towns of Nubul and Zahra, which have been besieged by militant groups for over a year.Backed by the Russian air force and Iran over the past several months, the Syrian army attacked key rebel strongholds across the country."The Syrian government force is grasping the initiative in the current situation of the battle. With the help of Russian and Iranian allies, they have become the most powerful force in the western part of the country," said Mazin Bilal, a political analyst in Syria.Meanwhile, the Syrian armed forces have captured the town of Salma and Rabiah, which were considered as the two main rebel bastions north of Latakia, close to the Turkey area, and Al-Sheikh Miskeentown in southern province of Daraa in the past two weeks."The progress of the war has given each side the bargain chips. One side holding 50 percent of the territory could not compete with the other side that holds 75 percent to 80 percent of the territory. So I think that the territory they are occupying is the biggest bargaining chip at the peace talks table. The progress of the Syrian armed forces could bring more negotiating advantages to the delegation of the Syrian armed forces at the peace talks in Genevea," said Sarikis Kassargian, another political analyst.Estimates reveal that 250,000 Syrian people have died in the five years since the war started and that more than 4 million people have fled as a result of a protracted political crisis pitching Syrian president Bashar al-Assad against anti-government forces, with terrorist factions such as the Islamic State (IS) and Al-Nusra also in the mix.An additional 6.5 million have been internally displaced by the conflict and 13.5 million people inside the country are in urgent need of humanitarian aid.