'Syrians view Israel as the defender of the Assad regime'

Susan Ahmad, a Syrian human rights activist from the Damascus suburbs, fiercely criticized the American administration and Israel for ignoring the distress of the Syrian people. 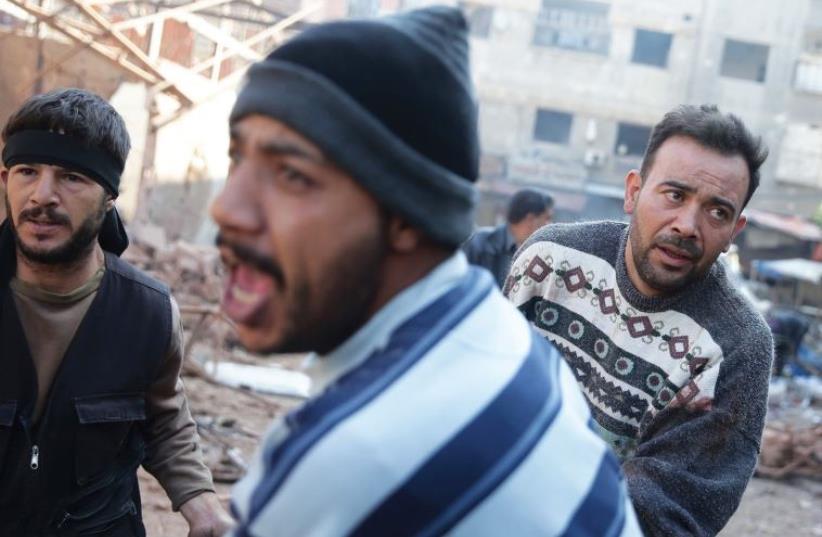 MEN CARRY casualties from a damaged site hit by missiles fired by Syrian government forces on a busy marketplace in the Douma neighborhood of Damascus, Syria on October 30.
(photo credit: REUTERS)
Advertisement
More than five years into the Syrian civil war, there seems to be no conceivable solution to the bloody conflict in the country. Amid a horrendous wave of terror attacks carried out by ISIS in the West, Syrian people are seeking to draw the world's attention to their own atrocious daily routine that includes heavy barrel bomb shelling by the government and starvation.The Jerusalem Post interviewed on Wednesday Susan Ahmad, a Syrian human rights activist from the Damascus suburbs and a reporter of Akhbar al-An, a Syrian site that documents ISIS crimes in the Middle East, to hear her opinions about the war and the parties involved.Regarding the American policy toward the Syrian conflict, Ahmad fiercely criticized the American administration for ignoring the distress of the Syrian people."The behavior of the American administration is the utmost weakness and hypocrisy of humankind and is a mark of disgrace in the history of America, which paints itself as the champion of human rights. Unfortunately, while the US preaches for freedom and honor, it has not done enough to stop the fighting and put the killer (the Syrian president, Bashar Assad) on trial," Ahmad said."It is hard to predict how the new American president will act toward Syria, especially if it will be Donald Trump, who expressed hatred for Muslims. If he would be elected, I hope that he would at least not damage Syrians if he would not help them," she added.Speaking about the American tendency to support the Syrian Kurdish Forces (YPG) for the liberation of ISIS-held territories, Ahmad said: "The Kurdish units are part of the regime that kills civilians.""ISIS is humanity's enemy, but the decision to support Kurds and strengthen them is another sign of weakness. It enables the Syrian regime to kill civilians and draw the world's attention to the fighting between the Kurds and ISIS," Ahmad stated."In the end, it is the regime that killed hundreds of thousands of Syrians, while ISIS killed only a small portion. It is clear who the bigger criminal is. Thus, focusing efforts on the fight against the smaller criminal will not solve the problem and will not prevent further spilling of blood," she added.According to the Syrian activist, the United Nations could have put an end to the human tragedy in Syria."The UN can enforce a resolution of military intervention in Syria under Chapter Seven of the UN charter. The entire world can pressure Russia and the regime to stop carrying out airstrikes against hospitals and civilians," Ahamd said."Aleppo is exterminated while the entire world watches, sitting idly by and allowing the Syrian regime to continue massacring civilians," she added.
Regarding Iran's participation in the fighting, buttressing Assad's forces, Ahmad said: "Iran kills civilians together with the regime and I hope that in light of the death of many senior Iranian commanders in the Syrian battlefield, it will decide to withdraw and not participate in the killing of civilians in Syria."Ahmad slammed the recurrent allegations by the Syrian regime according to which Israel supports rebel factions fighting to topple the regime such as the Nusra Front, and criticized Israel for not supporting Syrians."How could it be that after five years of bloody war, Israel is still considering whether to help the Syrian people get rid of their dictator?! Honestly, many Syrians view Israel as a mere defender and partner of Assad's regime, claiming that it provides Assad's forces military and political support that enables them to continue killing Syrians," Ahmad said.Ahmad concluded the interview stating: "If the world would have wanted to solve the refugee problem, it would have stopped Assad's crimes and put him on trial for the war crimes he had committed. If the world would have wanted to prevent people from starving to death, it would have obligated Assad to lift the siege on besieged areas or it would have dropped food to people by airplanes instead of allowing airplanes to shell these people."
Advertisement
Subscribe for our daily newsletter