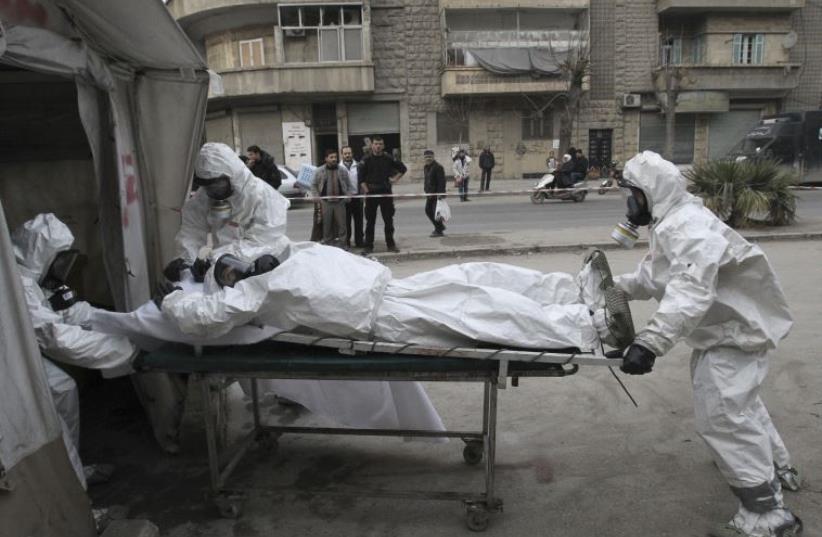 Syrian opposition group carries out chemical weapons drill (illustrative)
(photo credit: REUTERS)
Advertisement
A "terrorist" group launched a chemical attack that killed five people in Aleppo on Tuesday, CNN quoted a Syrian government official as saying. Meanwhile, an Anti-regime group stated chlorine gas canisters were dropped in Idlib province. If the two attacks are connected is still unclear.The state-run SANA news agency quoted Mohamad Hazouri, Aleppo's health director, as saying "Five civilians were killed and eight others suffered suffocation due to a terrorist attack with shells containing poisonous gas."Regarding the Idlib attack, a team of opposition groups, the Syrian National Council, said, "Developments on the ground show how the Assad regime continues to blatantly ignore international law and UN Security Council resolutions, especially those related to the use of chemical weapons," CNN quoted.The incident took place in the same area that a Russian helicopter was downed on Monday, killing all five passengers. The US State Department issued a statement Tuesday afternoon that if the reports of toxic gas dropping in the area are true, it would be "extremely dangerous."In March, then Israeli defense minister Moshe Ya'alon condemned Assad's regime for using chemical weapons during a truce, saying, "The Syrians used military grade chemical weapons and lately have been using materials, chlorine, against civilians, including in these very days, after the supposed ceasefire, dropping barrels of chlorine on civilians."A fact-finding mission of the global chemical weapons watchdog (OPCW) concluded in 2014 that the use of chlorine gas has been "systematic" in the Syrian civil war, even after the country surrendered its stockpile of toxic weapons.Reuters contributed to this report.