Professor and geostrategist Arnon Soffer says nobody will be happy with the outcome of the Syrian refugee crisis and only expects it to get worse, thanks to global demographic trends. 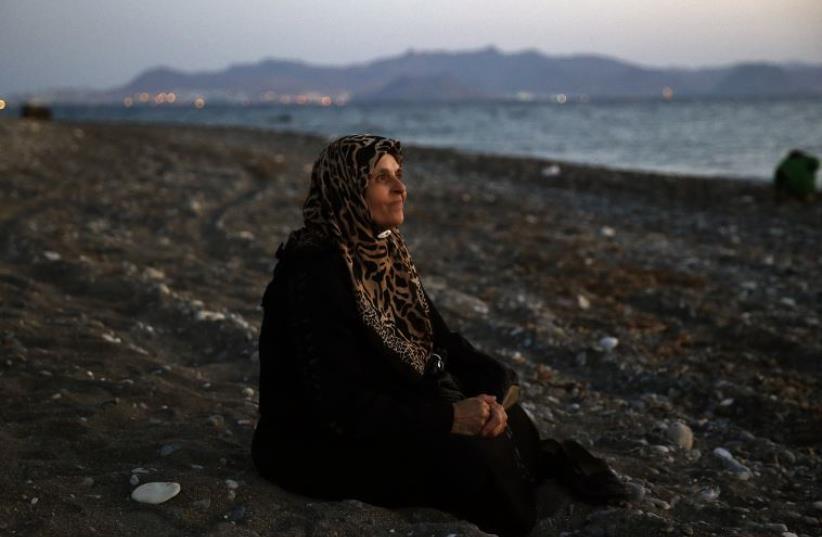 Amoun, 70, a blind Palestinian refugee who lived in the town of Aleppo in Syria, rests on a beach moments after arriving along with another forty on a dinghy in the Greek island of Kos
(photo credit: REUTERS)
Advertisement
The developed countries of the world are scrambling to come up with a solution to the refugee problem but one Israeli geostrategist does not see an end in sight. Professor Arnon Soffer, head of Geostrategy at the University of Haifa, told the The Jerusalem Post on Monday that the current refugee crisis is a result of uneven population growth around the world, which he expects to only get worse.
Israel and the Syrian refugees
He said that as populations in poor countries around the world continue to explode, European birthrates continue to decline. The continent of Europe is "committing suicide" for allowing its own population to decline so much, he said, calling it a culture that "would rather have cats and dogs than children," which he joked was similar to Tel Aviv.He used the continent of Africa as an example. With around one billion people currently living on the continent and another half million expected in the next, decade, Soffer does not think it will be possible to create the necessary infrastructure, water systems, medical clinics and schools to accommodate everyone. This, he said, will force more and more people to seek asylum elsewhere.
Holocaust refugee: We owe it to mankind to allow Syrian refugees into Britain
"[Building the infrastructure] in another 10 years? Mission impossible," Soffer said. "They will head for one [place]: Europe." He said that though countries like Germany are welcoming in refugees with open arms and need more young people, they may face a backlash from their own populace who want to maintain local culture. However, he said that the  Muslim population in Europe is not interested in assimilating and that this will only worsen as more arrive. "Europe potentially can open its doors and accept more and more refugees, but if Europe says no, I can understand because they are afraid [of] the Muslims," he said. "This is a clash of civilizations and it will not happen in Africa or Asia. It will happen in France, Hungary and will eventually reach England and Germany." He criticized what he called the hypocrisy of Europe, touting peace and liberty, while the "bloody navies of Europe" turn back refugees coming by sea, letting them drown in the Mediterranean, or allowing them to suffer on land with nowhere to go.Soffer does not believe that Israel should accept more Syrian refugees, in contrast to calls by some Israeli politicians and Palestinian Authority President Mahmoud Abbas.He noted that it is a desirable place because it is the only developed country in the region that refugees can reach by foot. However, he said Israel is too small of a place to absorb refugees. "We are a very small country," Soffer said. "We [have been] at continuous war for the past 67 years. Sixty percent of Israel is a military landscape. Sixty percent is desert and please leave me some space for additional Jews to come. So this is the story of Israel and we cannot be as generous as everyone expects us to [be]. No, we cannot do it.Soffer said there is no way to stop what he referred to as a "Tsunami Wave" of asylum seekers coming to Europe and does not expect a solution in the near future due to the global scale of the problem."We are Western and [taught] by Hollywood that everything must have a happy ending. I do not see a happy end."