While acknowledging its military setbacks in the face of a global campaign against it, Islamic State uses the new film to urge followers to maintain their faith in IS even in adversity. 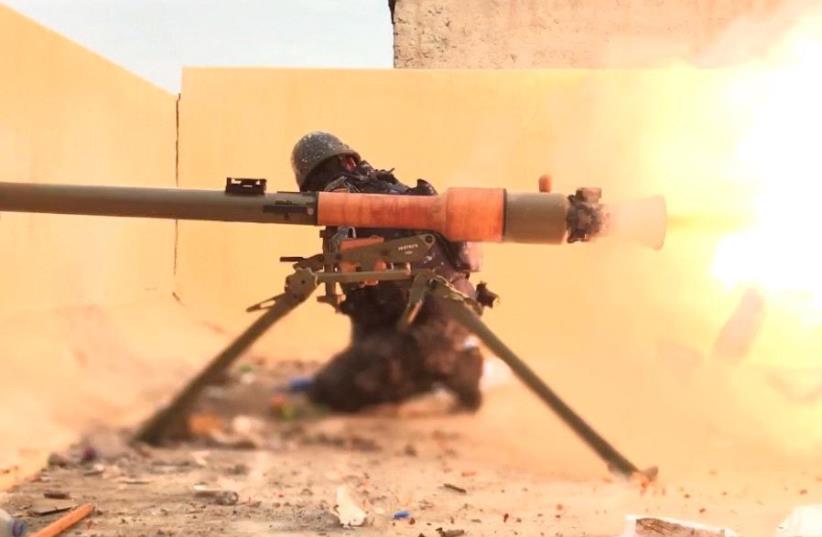 A FIGHTER with Iraqi forces looks away as his weapon fires ISIS targets in
(photo credit: SETH J. FRANTZMAN)
Advertisement
BEIRUT, March 12 - Even as it faced imminent defeat in its last populated territory in eastern Syria, Islamic State made a new propaganda film calling on the few remaining residents of its cold, besieged encampment to maintain their prayers and seek refuge in God.
"Servants of God, keep reciting your prayers and ask for forgiveness," the loudspeaker of a beaten up van cries as it tours the ramshackle camp in the video. "Repent and ask God for forgiveness, oh servants of God, for perhaps the almighty will find a way out for us."
The video's tone is a far cry from the jihadist group's earlier productions, which boasted of victories in taking over around a third of Syria and Iraq at its height in 2014 and summoned followers around the world to join a growing society.
While acknowledging its military setbacks in the face of a global campaign against it, Islamic State uses the new film to urge followers to maintain their faith in IS even in adversity.
The US-backed Syrian Democratic Forces said on Tuesday the assault to capture the besieged enclave of Baghouz, near the Iraqi border, was as good as over.
"Tomorrow, God willing, we will be in paradise and they will be burning in hell," said an Islamic State member whom the video identified as Abu Abd al-Azeem, whose speech is peppered with Koranic recitations.
Though the physical "caliphate" it declared in 2014 is now in ruins, the video showed Islamic State has not renounced its claim to be the contemporary heirs to Islam's Prophet Mohammed, sovereign over all Muslim lands and people.
"The infidels laughed at, humiliated us in this world, but war has its ups and downs and the battle is not over," al-Azeem said, adding that IS leader Abu Bakr al-Baghdadi is the only Muslim leader on earth today.
Azeem, wrapped in a thick winter cloak, sits on the ground around a steaming cooking pot. Next to him is a bored-looking boy of around 10 years old, peering out from a thick coat hood.
SIEGE
The SDF has been laying siege to Baghouz for weeks but repeatedly postponed its final assault to allow the evacuation of thousands of civilians, many of them wives and children of Islamic State insurgents. The attack resumed on Sunday, backed by coalition air strikes.
The video, uploaded to IS online channels overnight, shows a community living on farmland in rough dwellings made of blankets, tents, trucks and trailers.
Men eat soup-like food from pots cooking on outdoor fires, sitting on upturned buckets or on the floor. As thousands of people flooded out of Baghouz in recent weeks, many told of severe shortages, with people reduced to eating grass at times.
Azeem implores watchers not to focus on worldly conditions, suggesting those still in Baghouz were martyrs as he referenced part of the Koran that describes how a group of people were burned in a ditch because of their strong belief in God.
After its sudden advance across swathes of Syria and Iraq in 2014, Islamic State's wholesale slaughter or sexual enslavement of minorities and its grotesque public killings roused global anger.
Al-Azeem says all IS wanted to do was apply God's law.
"Why are we bombed by planes, why do all the nations of the unbelieving world come together to fight us? ... What is our guilt? What is our crime? We (just) wanted to apply the sharia of God," he said.
Titled "The Meaning of Constancy, from Baghouz", the video is dated with the Islamic month of Rajab, which began on March 9, but it is unclear exactly when it was filmed.
Over the course of the video, dozens of men with faces wrapped in scarves, young boys and the occasional woman dressed in black robes are seen milling around the encampment.
A bustling main street in the enclave is lined with small trucks and tent structures. People make their way along the street by motor bike or on foot.
IS still operates in remote territory elsewhere in Syria and Iraq and it is widely assessed that it will continue to represent a potent security threat after the fall of Baghouz.
"Do not be afraid, brothers, be cheerful and have faith," said a man the video called Abu Addallah. A black balaclava obscured all but his eyes, and he spoke with a North African accent.