Jaysh al Islam, with thousands of trained fighters, is the biggest and seen as the most organized rebel group. It has been effectively running the administration of Eastern Ghouta. 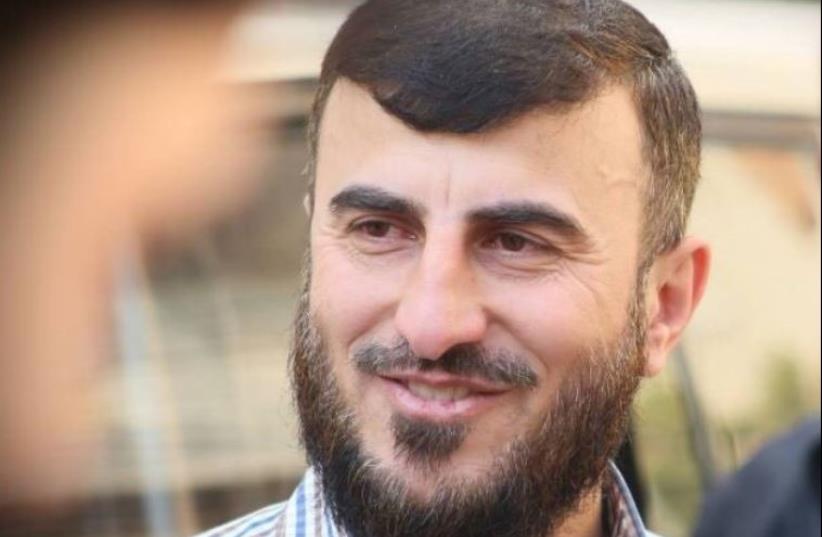 Zahran Alloush, the head of Jaysh al Islam
(photo credit: ARAB SOCIAL MEDIA)
Advertisement
The head of the most powerful Syrian insurgent group in the rebel-held suburbs of Damascus was killed on Friday in a Russian air strike on the secret headquarters of his group, rebel sources said.The Syrian army confirmed the death of Zahran Alloush, whose Jaysh al Islam grouping has thousands of fighters and is the biggest rebel faction in the area.Several rebel group leaders have been killed since Russia launched its air campaign on Sept. 30 in support of President Bashar Assad, whose troops had suffered a series of setbacks in a civil war now nearing the end of its fifth year. No immediate comment was available from the Russian defense or foreign ministries.Alloush's removal dealt a major blow to rebel control of the eastern rural suburbs of Damascus, known as al-Ghouta.It came as around 2,000 Islamist fighters, including members of Islamic State and al-Qaida's Nusra Front, prepared to be evacuated by bus from a rebel-held part of southern Damascus that has been besieged by government forces for years. They are due to leave under a United Nations-brokered deal that marks another success for the Assad government, increasing its chances of reasserting control over a strategic area just 4 km (2.5 miles) south of the center of the capital.Separately, the Syrian army said on Friday it had fought its way close to the strategic, rebel-held Aleppo-Damascus highway - its latest gain in a major offensive supported by Iranian-backed Shi'ite militias and Russian air power.The combined developments all strengthen Assad's position as his government prepares for peace talks that the United Nations is planning to convene in Geneva late next month.The UN Security Council on Dec. 18 unanimously approved a resolution endorsing an international road map for a Syrian peace process, a rare show of consensus among major powers on a conflict that has claimed over a quarter of a million lives.Alloush's Jaysh al Islam, with thousands of trained fighters, is the biggest rebel group, and seen as the most organized. It has been effectively running the administration of Eastern Ghouta.Alloush was ideologically at odds with Islamic State and al Qaeda, espousing a more moderate brand of Islam and fighting to drive the ultra-militant Islamists out of his territory. But he was criticized for a crackdown on dissidents and accused of kidnapping several prominent activists in 2013.Syria has long accused Saudi Arabia of paying for arms and other supplies to Alloush. But he is reported to have failed, in visits to countries hostile to Assad, to get the support he wanted for his group.Defense experts say disarray in rebel forces could consolidate Assad's control over the rest of al-Ghouta, which has been besieged by his forces for several years and has been the target of intensive raids on civilian-populated areas.In a separate development, a British-based monitoring group said the last of some 200 al-Qaida-affiliated Nusra Front fighters operating in Deraa province in the south had been given safe passage by the Syrian authorities to leave for rebel-controlled Idlib province.Damascus agreed to the move in return for the release of Iranian officers captured by Nusra while fighting alongside the Syrian army, said Rami Abdulrahman, head of the Syrian Observatory for Human Rights. The evacuations of rebels from south Damascus and Deraa follow previous local deals on truces and safe passage, brokered with the support of outside powers or the United Nations, which has described them as possible stepping stones towards a wider ceasefire.Syrian Foreign Minister Walid al-Moualem said on Thursday that Damascus was ready to take part in the forthcoming Geneva peace talks and hoped that the dialogue would help it form a national unity government.