Top US diplomat leaves Gulf after crisis talks, no word on progress

Tillerson declined questions after meeting Qatar's emir to discuss Doha's feud with four Arab states that cut ties with it on June 5 over allegations it funds extremist groups. 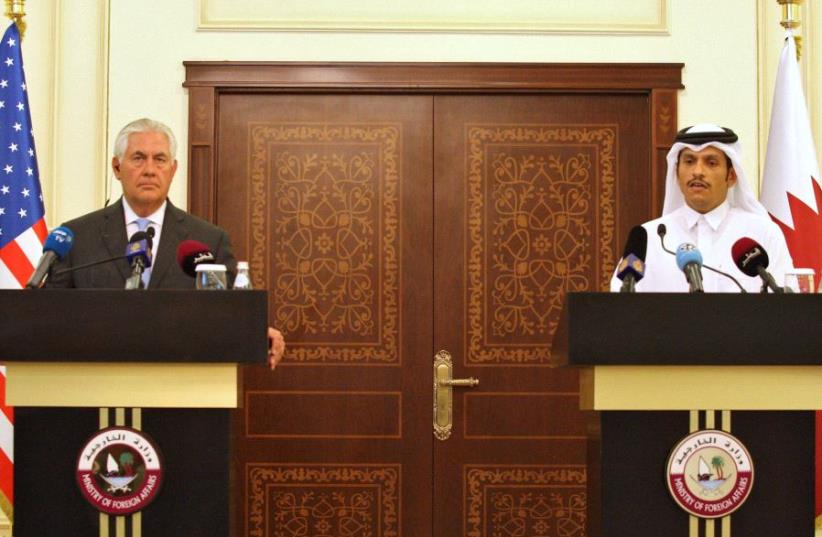 Qatar's foreign minister Sheikh Mohammed bin Abdulrahman al-Thani (R) and US Secretary of State Rex Tillerson attend a joint news conference in Doha, Qatar, July 11, 2017
(photo credit: REUTERS)
Advertisement
DOHA - US Secretary of State Rex Tillerson left Qatar on Thursday after a tour of Gulf Arab countries aimed at easing the worst regional dispute in years, but made no comment on whether any progress had been made in resolving the month-long crisis.Tillerson declined questions after meeting Qatar's emir, Sheikh Tamim bin Hamad al-Thani, to discuss Doha's feud with four Arab states that cut ties with it on June 5 over allegations it funds extremist groups and is allying with their arch-foe Iran. Qatar denies this."Hope to see you again under better circumstances," the emir's brother, Sheikh Mohammad bin Hamad al Thani said, seeing Tillerson off at the airport in Doha.On Wednesday, Tillerson left the Saudi Red Sea city of Jeddah after talks with ministers from Saudi Arabia, Bahrain, the United Arab Emirates and Egypt, the four countries which have imposed travel and commercial sanctions on Qatar.He had earlier signed a US-Qatari accord on terrorism financing in an effort to help ease the crisis, but Qatar's opponents said it fell short of allaying their concerns."No wavering on the 13 demands" the headline of the Abu Dhabi government-linked al-Ittihad newspaper read on Thursday, refering to a list of demands the Arab states had put to Qatar.