The spy thinks he works in a civilian capacity, and has unknowingly been transmitting information to Israel for the last five years. 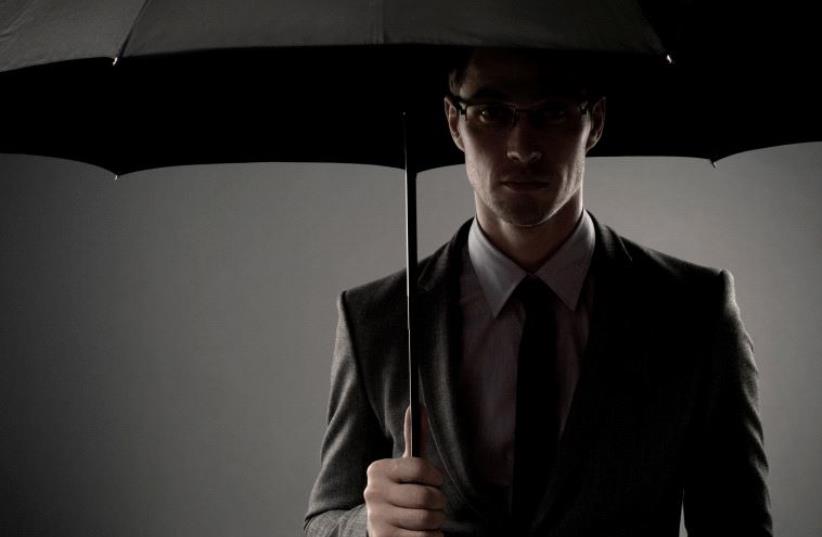 A mysterious man in a black suit standing in the shadows underneath an umbrella, looking like a spy or a secret agent [Illustrative]
(photo credit: INGIMAGE)
Advertisement
Netflix released The Spy and gave the world a glimpse at the complex nature of Israeli intelligence missions. Like The Spy, the case of Torpedo is real, but seems Hollywood-like in nature. There are two major differences between Eli Cohen and Torpedo. The first is that Torpedo is still spying for Israel. The second is that Cohen received extensive training for his mission, whereas Torpedo doesn't even know he's a spy.Israeli daily Yediot Aharonot reported a sample of the story on Thursday, and is expected to release the rest over the weekend. Torpedo is a senior official in an Arab country who doesn't know that Israeli Intelligence Division's 504 unit has recruited him as a spy. The unit revealed this information in a rare moment of transparency.The spy thinks he works in a civilian capacity, and has unknowingly been transmitting information to Israel for the last five years."We are always aiming for sources of high intelligence, in very significant roles. It inevitably raises the level of difficulty, because anyone who has reached a senior position is already older, more experienced, alert and more suspicious," the lieutenant colonel who serves as a commander in 504 and oversees the Torpedo file, told Yediot. Due to the secret nature of his job, the Lt.-Col. was only identified by the first letter of his name in Hebrew, Ayin.The challenge was not only getting to someone as senior as Torpedo, but also making him divulge information."As a civilian body, for example, you are not threatening the target and not scaring him," D., Torpedo's handler in the 504 told the newpaper. "While collecting information about Torpedo, I discovered that he had an acquaintance, a distant relative, who lives abroad and had previously been in a particular field. I made contact with the same acquaintance online and began to take an interest in him and topics he specializes and is considered competent in. He was happy to cooperate," D. continued. "I don't mention [Torpedo], not even with a hint. Then the acquaintance - who is already very interested in working with us - brings up Torpedo's name. He tells me about his relative who is senior in that country. He explains to me that because of his status, he is very close to all parties, very connected. I agree with him that I will think about the ideas that came up in our communication and that I will come back to him with an answer here or there," he said.My goal here is to convey to him that I'm not eager, not in a rush. I want to create an expectation for him. That he should check his email every day, waiting for my answer. Then comes the initial contact phase."That's where Torpedo's story ends... for now. More will be released over the weekend.Israel is still using Torpedo as an information source.