Trump pledges US aid to help Lebanon against Islamic State

Trump did not specify what level of support Lebanon would receive from the United States. 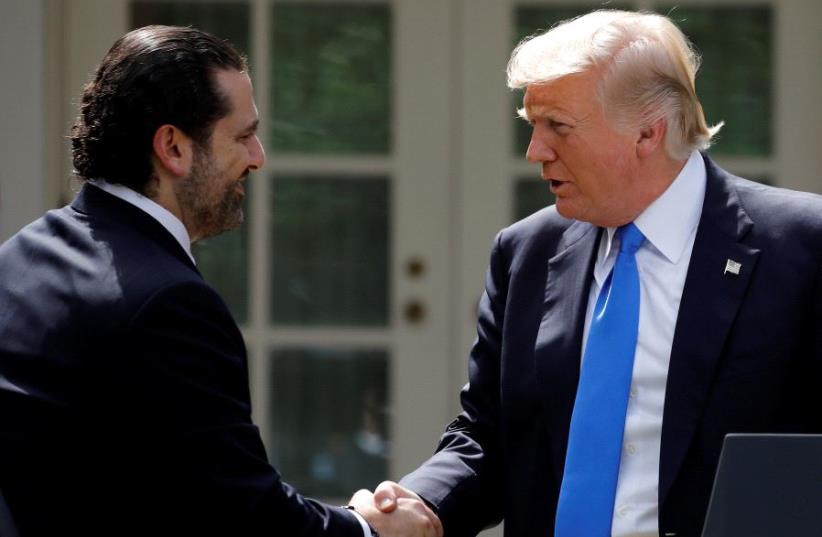 US President Donald Trump shakes hands with Lebanese Prime Minister Saad al-Hariri during a press conference in the Rose Garden of the White House in Washington, US, July 25, 2017.
(photo credit: REUTERS)
Advertisement
WASHINGTON - US President Donald Trump on Tuesday praised Lebanon's efforts to guard its borders to prevent Islamic State and other militant groups from gaining a foothold inside their country and promised continued American help."America's assistance can help ensure that the Lebanese army is the only defender Lebanon needs," Trump said at a White House news conference after talks with Lebanese Prime Minister Saad al-Hariri.Trump did not specify what level of support Lebanon would receive from the United States, but both Trump and Hariri expressed optimism about future military cooperation.When asked about US support for the Lebanese army, Hariri said that hopefully the aid would continue as it had in the past. He added later that he felt there was "huge understanding" within the Trump administration about helping the army.Lebanon's military has received hundreds of millions in military assistance from the United States and Britain in recent years, as part of efforts to bolster Lebanon against a threat from militants across the Syrian border.Standing beside Hariri in the White House Rose Garden, Trump said Hezbollah was a threat to Lebanon from within. He called the Iran-backed Shi'ite Muslim group a "menace" to the Lebanese people and to the entire region.US lawmakers introduced legislation last week seeking to increase sanctions on Hezbollah by further restricting its ability to raise money and recruit and increasing pressure on banks that do business with it.Officials in Lebanon have raised concerns that US efforts to widen sanctions on Hezbollah could damage the banking industry because of the group's widespread influence in their country. Hezbollah, classified by Washington as a terrorist organization, holds seats in Lebanon's parliament and government.Hariri said he had spoken with Trump about the proposed legislation and would have further meetings this week with members of Congress."Additional bills if they are to come, we believe that it's not necessary ... but if they want to issue these bills, we need to protect Lebanon from any miswording in the bill," Hariri told reporters at a briefing.Hezbollah backs Syrian President Bashar al-Assad's government in Syria's civil war and has sent fighters there."I'm not a fan of Assad," Trump said. "What he's done to that country and to humanity is horrible."The United States and Russia, a major ally of Assad, brokered a ceasefire earlier this month in southwest Syria."The more that the Americans and the Russians talk to each other, I think it's to the benefit of the stability of the region," Hariri said.