Trump to troops: All children of all faiths deserve a future of hope 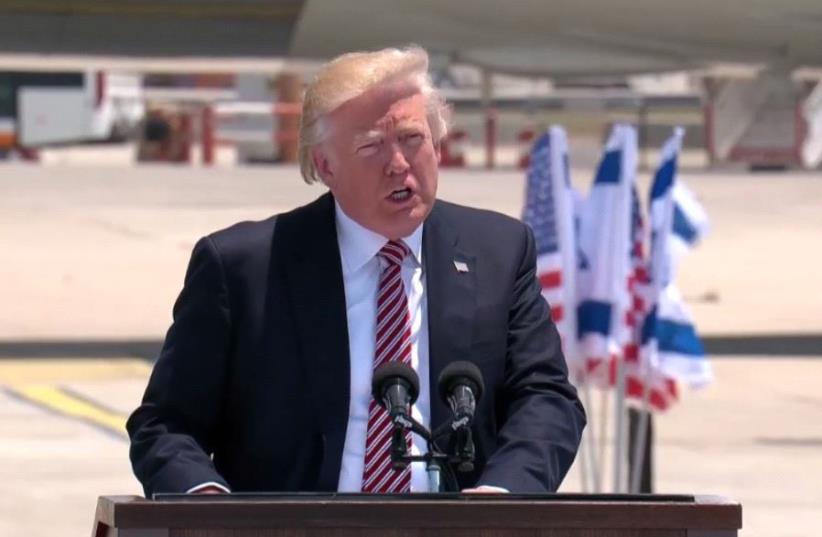 US President Donald Trump speaks at Ben Gurion Airport
(photo credit: screenshot)
Advertisement
US President Donald Trump told US troops stationed in Sicily on Saturday that during his trip to Jerusalem last week, he “reaffirmed our unbreakable bond with the State of Israel” and “continued our discussion about fighting terrorism and crushing the organizations and ideologies that drive it.”Trump, speaking before concluding his first overseas trip as president and returning to the US, said that Palestinian Authority President Mahmoud Abbas “assured me that he is willing to reach for peace with Israel in good faith – and I believe him.” Likewise, he said, Prime Minister Benjamin Netanyahu “assured me that he, too, was ready to reach for peace – he is a friend of mine, and he means it.”Trump said that he was “awed by the majesty and beauty of the Holy Land, and the faith and reverence of the devoted people who live there.”To applause, he added, “All children of all faiths deserve a future of hope and peace, a future that does honor to God.”Trump also related that he visited the Western Wall, which he termed a “monument to the perseverance of the Jewish people.” UNESCO, in a resolution last year, tried to expunge any Jewish connection to the Western Wall.US Ambassador to the United Nations Nikki Haley is set to travel to Israel during the first week of June, although the exact dates haven’t yet been finalized with her office.Haley will be accompanied on the two- to three-day trip by her Israeli counterpart at the UN, Danny Danon.According to a Foreign Ministry source who shared her itinerary with The Jerusalem Post, Haley will begin in Jerusalem, where the she will meet with Netanyahu and President Reuven Rivlin. She will then tour Yad Vashem and the capital’s Old City.
There is a "rare opportunity" for peace in the Middle East - Trump
The US ambassador will then head north to a location overlooking the borders with Lebanon and Syria, where she will receive security briefings from Israeli military officials. Haley will conclude her visit with meetings in the Palestinian Authority.Trump’s pick for United Nations representative has gained much popularity in Israel since she gave her first press briefing at the UN back in February.In it, Haley strongly denounced the Security Council’s bias against Israel and vowed that the US would no longer turn a blind eye to it.Later in April, as she presided over the council, Haley set new rules for the forum’s monthly Middle East debate and insisted that the countries discuss issues such as Iran’s support for terrorism, the Syrian crisis, Hezbollah and Hamas, instead of exclusively focusing on what she called “Israel bashing.”