About 250 people were killed in the failed putsch, in which Gulen, a former ally of President Tayyip Erdogan, has denied involvement. Gulen has lived in self-imposed exile in Pennsylvania since 1999. 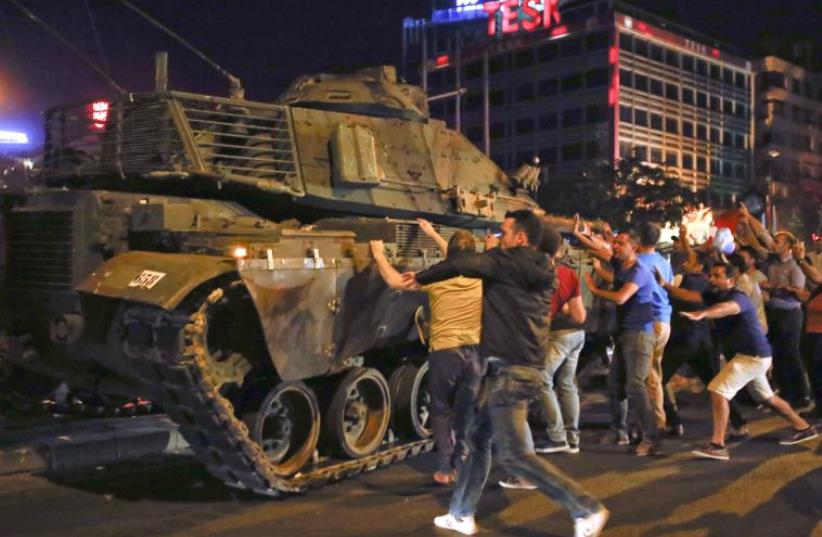 People react near a military vehicle during an attempted coup in Ankara, Turkey, July 16, 2016.
(photo credit: REUTERS)
Advertisement
ISTANBUL, March 22 - The Istanbul chief prosecutor said on Friday it had ordered the detention of 126 suspects employed in the judicial system with alleged links to the network of Fethullah Gulen, a cleric who Turkey says orchestrated a July 2016 coup attempt.
About 250 people were killed in the failed putsch, in which Gulen, a former ally of President Tayyip Erdogan, has denied involvement. Gulen has lived in self-imposed exile in Pennsylvania since 1999.
Turkey says that along with its military and state institutions, its judiciary was infiltrated by members of Gulen's network. Since the coup, thousands of prosecutors and judges have been dismissed.
The prosecutor's office said the suspects had lived in houses where the network trained individuals for work in the judicial system. The network then sought to place those who passed the exam in the judicial system as prosecutors or judges, while the rest became part of the network's lawyer organization.
Of the 126 suspects, 108 were lawyers on active duty, eight were judge or prosecutor candidates who were previously removed from their positions and one was a judge or prosecutor candidate on active duty, the prosecutor's office said.
Addresses of 12 of the suspects could not be determined or records showed they had left the country, it said, adding that operations spread over 37 provinces to detain the remaining 114 people were continuing.
In a separate operation on Friday, Ankara chief prosecutor's office said it ordered the detention of 18 suspects accused of links to Gulen who were working as engineers for the defense industry company Havelsan.
More than 77,000 people have been jailed pending trial since the coup and widespread arrests are still routine. Authorities have suspended or sacked 150,000 civil servants and military personnel.
Turkey's Western allies have criticized the crackdown, with Erdogan's critics accusing him of using the putsch as a pretext to quash dissent. Turkish authorities say the measures are necessary to combat threats to national security.