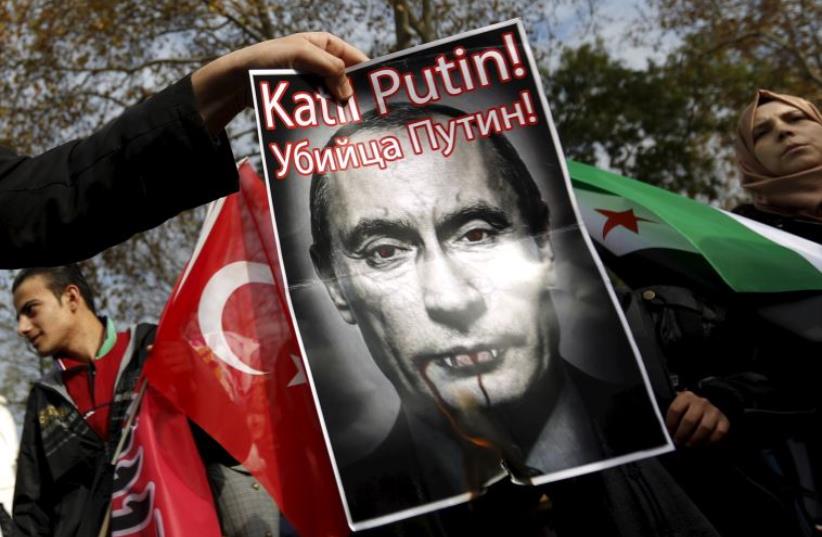 Pro-Islamist demonstrators set fire to a defaced poster of Russia's President Vladimir Putin during an anti-Russian protest in Istanbul
(photo credit: REUTERS)
Advertisement
A Russian SU-34 jet violated Turkish airspace on Friday despite radar warnings, Turkey's foreign ministry said on Saturday, underscoring the bitterness between the two countries involved in Syria's war.The Russian ambassador was summoned over the incident late on Friday, the statement said, adding that the violation was a clear sign that Russia wanted issues between the two countries to escalate."We are making a clear call to the Russian Federation not to violate Turkish airspace, which is also NATO airspace," the statement said."We are emphasizing once again that the unwanted consequences of such irresponsible behavior will belong fully to the Russian Federation," it added. NATO Secretary General Jens Stoltenberg urged Russia on Saturday to "take all necessary measures" to ensure NATO airspace was not violated again.Turkish President Tayyip Erdogan said he wanted to meet his Russian counterpart Vladimir Putin after the incident. The two leaders have not met since the November jet downing incident."I told our foreign ministry to convey my desire to meet Mr. Putin personally. There has been no answer on this yet," Erdogan told reporters at the airport before departing for a visit to Latin America.Turkey shot down a Russian warplane in November in an incident that wrecked relations between the two countries. Russia has imposed economic sanctions on Turkey, hitting its tourism and exports.