Most of this crisis, and the world’s eyes, are concentrated on what was once a Turkish border town of 90,000 people called Kilis. 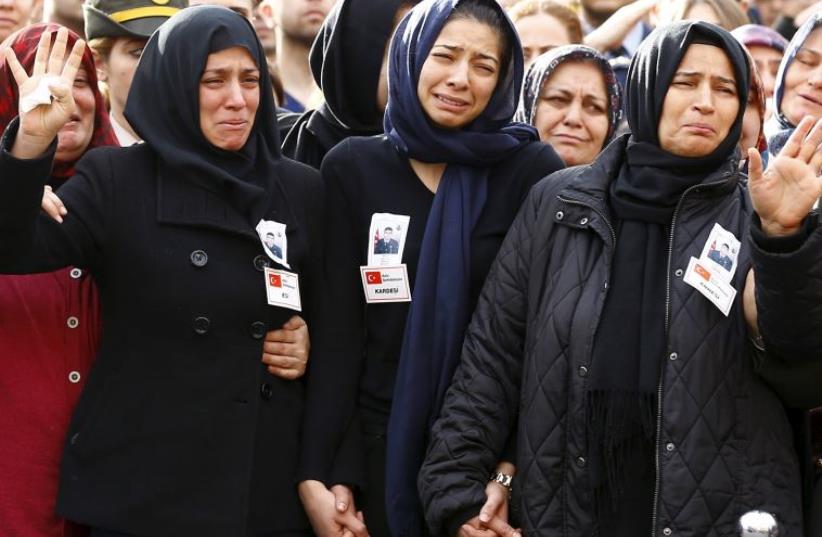 Family members of Army officer Seckin Cil, his mother Aysel (R), wife Beyza (L) and sister Busra (C), mourn during his funeral ceremony in Ankara
(photo credit: REUTERS)
Advertisement
GAZIANTEP – “People here are panicking,” a friend texted me from the Turkish-Syrian border near the town of Kilis on Wednesday night. There was palpable fear that a brutal bombing in the capital city of Ankara could mean a strong Turkish response. Almost everyone seems to know against whom: The Kurdish PKK in Turkey or the Kurdish YPG forces in Syria.In most of Turkey this sense of tension was not always immediately evident. People went about their business.Students went to school. But the normalcy was contrasted with the media and press which covered the bombing on their front pages, along with other stories about Turkish soldiers on the move and discussions of support for various policies regarding Syria, such as a no-fly zone along the Syrian border.Most of this crisis, and the world’s eyes, are concentrated on what was once a Turkish border town of 90,000 people called Kilis. Over the last four years this has become one of the main entry and exit points into Syria, particularly to what was Syria’s largest city, Aleppo. Locals estimate that Kilis now has 100,000 Syrians living in it, and an additional 13,000 are housed in a camp at the border.On Thursday the international and local press gathered in a long line to film what seemed like just a quiet border crossing. Trucks were going into Syria, but not much was coming out. This has been the process in recent weeks as Turkey has tapped down on the flow of refugees over security fears.“At night since Saturday you could hear the shelling,” one journalist who has been here for a week said, referring to Turkish artillery that has shelled YPG and its allies inside Syria, in what the government says is retaliation for attacks on Turkey. Across the border in Syria rebel forces control the immediate vicinity in a corridor that stretches toward Aleppo about 55 km. away. Around that corridor are ranged the forces of Islamic State, the Syrian regime and its Russian and Iranian allies, and the YPG, in ever-increasing pressure against the Free Syrian Army forces that have been fighting Bashar Assad since 2012.Turkey has traditionally enjoyed a good relationship with those Free Syrian Army anti-Assad forces, but is deeply hostile to the YPG and the Syrian regime. That creates a toxic mix that has led commentators to warn of World War III breaking out over this small strip of land because the major world powers, including the US and Russia, are all involved with the different groups here.For all the talk of war, the media bandwagons, and the endless press conferences on television talking about how Turkey is summoning a meeting of the UN and EU to discuss its position, many local Syrian refugees say they have heard it before. “They made the same talk before Russia intervened; Syrians are very angry and we have no choices,” said one man.A woman at a clinic said she was preparing to house additional refugees, estimated in the tens of thousands, who might flee fighting across the border. These refugees have seen and heard talk of war and no-fly zones and interventions before. They ask why Hezbollah, which is allied with Assad, is so well financed and has so many recruits, and yet the Syrian fighters resisting the regime are ignored by the international community. They see Assad going from strength to strength. There is a lot of resentment here against what is perceived as a betrayal of these people who wanted a different Syria, but instead lost their homes and now live in small caravans, or seek a new life in Europe.For now the residents of Kilis and the areas facing the Syrian border await sunset. Amid the intermittent sound of outgoing Turkish artillery fire designed to protect the border, students walking home to their dormitories expressed worry that they might soon find themselves on the front line.For the most part, however, kids and adults watched and listened with interest, then returned to their nightly routine. The road to the border is relatively quiet, save the few UN vehicles and aid trucks crossing over. But security men are in the main square. People are relaxing and children are playing in the alleyways.