Ties between Ankara and Washington risk further deterioration if the former chooses to circumvent American sanctions.

By KRISTINA JOVANOVSKI/ THE MEDIA LINE 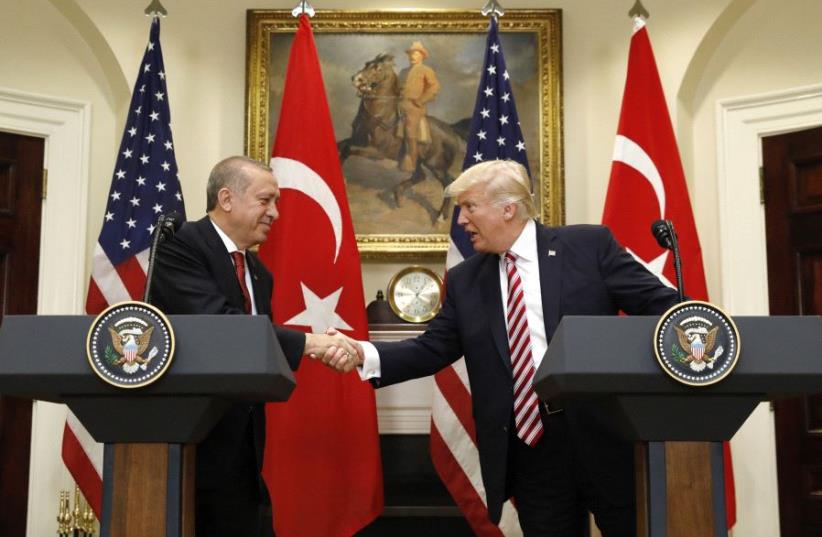 Turkey's President Recep Tayyip Erdogan (L) shakes hands with US President Donald Trump as they give statements to reporters in the Roosevelt Room of the White House in Washington, US May 16, 2017.
(photo credit: REUTERS)
Advertisement
Turkish President Recep Tayyip Erdogan’s vow to continue purchasing Iranian natural gas despite sanctions imposed by the United States will become another significant sticking point between Washington and Ankara, analysts told The Media Line.Erdogan's comments came in an interview with the Reuters news agency after US President Donald Trump asserted that countries could "face severe consequences" if they don’t comply with the American financial penalties.A first batch of US sanctions on Iran were re-imposed in August, with another tranche targeting the Islamic Republic's crucial energy and shipping sectors slated for implementation in November.“We need to be realistic.... Am I supposed to let people freeze in winter?... Nobody should be offended. How can I heat my people’s homes if we stop purchasing Iran’s natural gas?,” Erdogan asked rhetorically.Turkey relies almost entirely on external sources for gas and oil since it has almost no reserves of its own.Purchasing Iranian products is relatively inexpensive for Turkey given the two nations share a border. As such, cutting off the Iranian spigot would force Ankara to look to other more distant governments to meet its fuel requirements.“For that reason, it’s rational for Turkey to [continue buying Iranian gas],” Duke University Professor of Economics and Political Science Timur Kuran told The Media Line.Kuran explained that Turkey wants to diversify its sources of energy to not be overly dependent on one country, irrespective of the potential fall-out with Washington.“This issue is likely to be another source of conflict... it will not help repair relations that have been seriously frayed in recent years,” he nevertheless stressed.Ankara’s vital role in the region means there are a number of reasons why the US is interested in maintaining good ties with its NATO ally, even if it does not comply with sanctions.Turkey shares borders with both Iraq and Syria and can thus influence the outcomes of the crises there. Western countries also relied on Ankara to stop the flow of refugees, particularly into Europe, and Erdogan played a leading role in negotiating a demilitarized zone in the northern Syrian province of Idlib that has thus far prevented a regime offensive and resulting humanitarian crisis.But Ankara's interests in Syria have caused friction with the US, which is allied with the Kurdish YPG that Turkey claims is connected to the Kurdistan Workers’ Party (PKK). The PKK is considered a terrorist organization by Turkey, the US and the European Union.Notably, Erdogan accused the US on Friday of not removing YPG fighters from a northern Syrian city by an agreed time frame.Another point of contention is Turkey’s detention of US pastor Andrew Brunson, who faces terrorism charges. Washington has demanded his release, saying the allegations against him are baseless, but Turkey holds that his fate is up to the judiciary, not politicians.A diplomatic crisis has ensued, with the US applying sanctions on Turkish officials and Erdogan responding with a call to boycott American consumer goods.But with Erdogan and Trump slated to meet this week, there is hope that Brunson may be allowed to leave Turkey after his next hearing on October 12.Even if this does happen, relations between Ankara and Washington will still be strained if Turkey continues to buy natural gas from Iran, according to Nicholas Danforth, Senior Policy Analyst focusing on Turkey and the Middle East at the Washington-based Bipartisan Policy Center.“Iran sanctions have the potential to be the next big crisis in US-Turkish relations,” he conveyed in an email to The Media Line.“It's easy to imagine this escalating to the point where the US administration imposes secondary sanctions on Turkey, provoking an angry backlash from Erdogan.”Differences over Iran have already raised significant tensions between the two NATO allies. A Turkish citizen who worked for a Turkish state-owned bank is serving a 32-month prison sentence in the US after being convicted of evading sanctions on Iran.The US may also fine the Turkish institutions over accusations it played a role in the sanctions-busting scheme.Elmira Bayrasli, who teaches International Affairs with a focus on Turkey at Bard College, told The Media Line that the options for penalizing a government for circumventing sanctions, as opposed to a person or corporation, are limited.“You can prosecute individuals, you can prosecute companies. I’m not sure what Washington is willing to do.”Bayrasli said that since assuming power, Erdogan has worked to minimize problems with Turkey’s neighbors, including Iran, and its strong economic growth meant that it could reject US dictates more than it had in the past.“Now that you have emerging markets like Turkey…what you’re seeing is these countries able to make decisions independent of Washington,” she concluded. “Energy is going to be a bigger and bigger focus for a lot of countries because it is [crucial] for growth.”