Opposition warns the nation will suffer the consequences of media abuse. 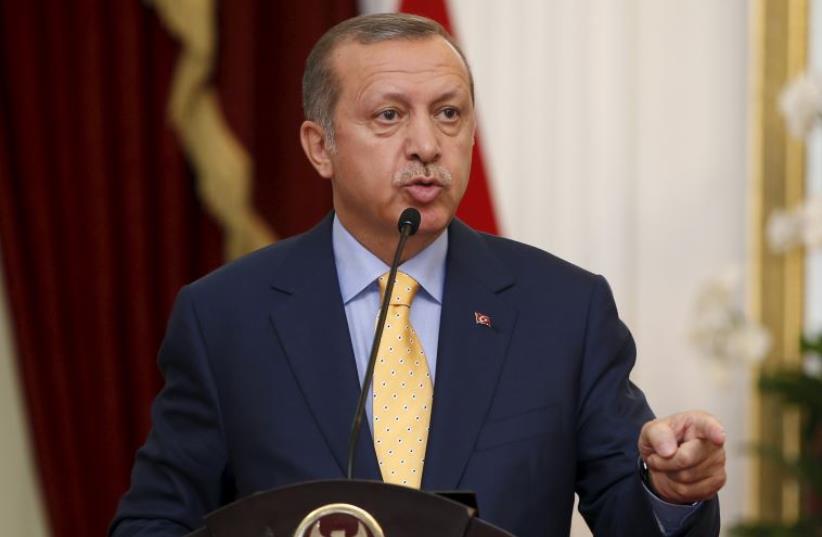 Turkish President Recep Tayyip Erdogan
(photo credit: REUTERS)
Advertisement
ISTANBUL – The Turkish government has commandeered a media group that includes the country’s largest oppositional newspaper, in its latest clampdown on critical media.On Friday, an Istanbul court appointed three trustees to replace the management and editorial board of Feza Publications, which owns the popular daily Zaman, its English-language sister publication Today’s Zaman, the Cihan News Agency, and Aksiyon magazine. “The police have not forced their way into the building yet, but I think they will,” Mustafa Edib Yılmaz, an editor and columnist at Zaman, told The Media Line over the phone late Friday afternoon. “I can see water cannon, I can see riot police. They’re lining up in front of the building as we speak.”“We all know the reasons to seize this institution are just a pretext,” said Sevgi Akarçeşme, editor-in-chief of Today’s Zaman, Turkey’s largest circulation English-language paper. “All authoritarian governments use the same tactics to control the media.”Feza Publications is closely affiliated with a global network of moderate Muslims led by Fethullah Gülen, ally-turned-rival of Turkey’s ruling Justice and Development Party (AKP). The government now considers the Gülen Movement, which is peaceful but has used its assets in the judiciary and police against the AKP, a terrorist group. Feza is being accused of supporting the alleged “terrorists.”“It’s no surprise, and I think more of this will come,” columnist and author Mustafa Akyol told The Media Line.He says that labeling the Gülenists a terrorist organization gives the government free reign to persecute followers at its pleasure. “[If] a businessman gives charitable donations to the Gülen movement for schools in Africa or whatever, that makes the businessman a supporter of terrorism.”In October, two newspapers and two television channels owned by Gülen-linked Koza İpek Holding were seized by authorities. The papers were immediately resurrected as pro-government publications, but all four outlets were shut down after a massive drop in demand and revenues.On Friday, the same day of the Feza takeover announcement, four top executives of Boydak Holding, one of Turkey’s largest conglomerates, were arrested by authorities for alleged links to Gülen.On Wednesday, a 32-year-old teacher in Kayseri was even detained for tweeting praise for the Gülen Movement.The government’s crackdown is not only on the Gülen Movement, but on virtually all voices critical of the AKP or President Recep Tayyip Erdoğan.On Wednesday Justice Minister Bekir Bozdağ announced that 1,845 people are awaiting prosecution for allegedly “insulting” Erdoğan. In one recent case, truck driver Ali Dinç filed a criminal complaint against his own wife for allegedly insulting the president.Last week the oppositional İMC TV was cut mid-broadcast and charged with spreading terrorist propaganda during an interview with the Cumhuriyet daily’s top editors Can Dündar and Erdem Gül. Dündar and Gül themselves had been recently released from jail for their own “terrorism” and espionage charges after their paper reported on alleged illegal government weapons shipments to rebels in Syria.Akyol says the attacks on critical news outlets are all part of the AKP’s grand media strategy. “The business model, if you will, is to create a huge pro-Erdoğan media empire, which they did. There are a dozen newspapers praising Erdoğan every day and demonizing his enemies. And also to keep the big, mainstream secular newspapers under control,” by scaring them into submission. Meanwhile, Akyol says, smaller, more staunchly oppositional papers are harassed but allowed to exist because they’re not very influential, their readers would never vote for the AKP anyways, and the government can point to them when claiming that Turkey has the “freest media in the world.”Andrew Finkel, co-founder of press rights group P24, says the assault on free speech degrades Turkey’s already shaky international reputation.“There will be a tidal wave of bad publicity because of this. When a government shuts down a newspaper, that’s not a good advertisement,” he said. “If the government comes in and closes businesses that are legitimate, this weakens any appetite for any outside investors to come in and do business with Turkey.”Finkel says Zaman, which technically has the largest circulation of any Turkish paper (though statistics are less than reliable), “will leave a considerable absence in the Turkish newspaper scene.”He says if the government tries to publish the outlets with pro-AKP orientations, they won’t sell.“A Gülenist newspaper under the control of Gülen enemies has a very minimal market value,” he said. “It will just evaporate”Zaman editor Yılmaz says there will be serious consequences from the government takeover. “Most of us will be fired,” he lamented, saying those with families are most concerned. As Yılmaz looked out the window, he could see loyal readers who had gathered outside Zaman’s offices to support the paper.“It’s raining now. They’re waiting in the rain, singing songs, chanting slogans, waving flags,” he said. “People are showing solidarity against suppression.”Later, close to midnight, riot police entered the offices and attacked the journalists and supporters with water cannons and massive amounts of tear gas.