Putin: Turkish leadership's policy of encouraging 'Islamization' is a problem

Putin made the comment a day after Turkey shot down a Russian jet that cost the life of one pilot. 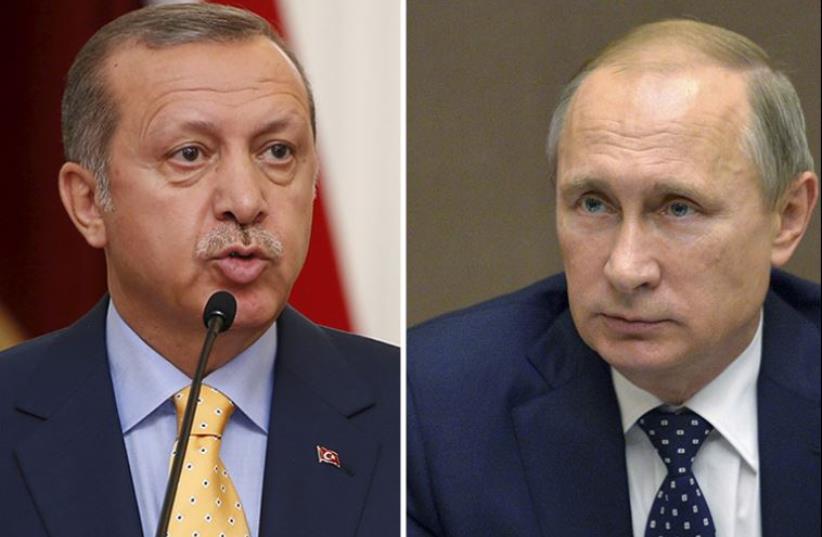 Putin and Erdogan
(photo credit: REUTERS)
Advertisement
Russian President Vladimir Putin on Wednesday said Turkey's political leaders had been encouraging the 'Islamization' of Turkish society, something he said was a problem, Russian agencies quoted him as saying.Speaking a day after Turkey shot down one of Moscow's jets, Putin said:"The problem is not the tragedy we witnessed yesterday," the TASS news agency quoted him as saying."The problem is much deeper. We observe ... that the current Turkish leadership over a significant number of years has been pursuing a deliberate policy of supporting the 'Islamization' of their country."Putin also said that an S-300 air defense system would be sent to Russia's air base in Syria, Interfax and other agencies reported. The Defense Ministry said earlier on Wednesday that Russia would send an S-400 system to the base.In a separate statement to agencies, Russia's Defense Ministry said that the second pilot of the downed SU-24 jet was safe and had returned to Russia's air base in Syria. On Tuesday, Obama and Turkish President Tayyip Erdogan spoke by phone about the need to de-escalate tensions with Russia after Turkey shot down the Russian warplane near the Turkish-Syrian border, the White House said.Obama expressed "US and NATO support for Turkey's right to defend its sovereignty," the White House said in a statement."The leaders agreed on the importance of de-escalating the situation and pursuing arrangements to ensure that such incidents do not happen again," the statement said. Erdogan on Tuesday defended Turkey's right to protect its borders after the plane was shot down, an incident he said Turkey had made every effort to avoid."Despite being warned 10 times in five minutes because it was coming towards our border, it insisted on continuing its violation. This plane was downed in an intervention by our F-16s," Erdogan said in a speech in Ankara, adding the actions were fully in line with Turkey's rules of engagement.