The #buypens movement is raising money to help a Syrian refugee who is a single father of two. 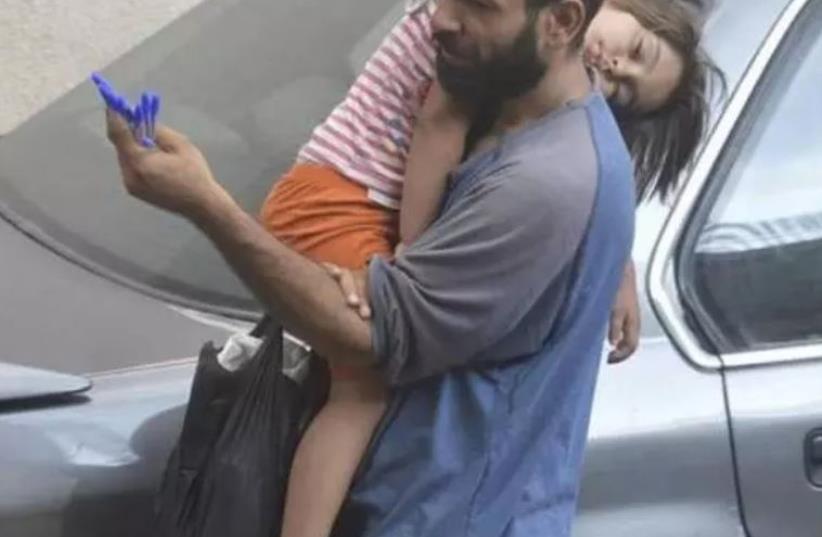 Syrian Refugee with his sleeping daughter sells pens on the streets of Beirut, Lebanon
(photo credit: GISSUR SIMONARSON CN TWITTER)
Advertisement
A photo of a Palestinian refugee that escaped from Syria to Lebanon carrying his sleeping daughter while walking the streets of Beirut, Lebanon trying to sell pens has gone viral and sparked an internet fundraising campaign that raised nearly $140,000 as of Sunday to help support the man and his family.

Syrian father selling pens in the streets of #Beirut with his sleeping daughter #Lebanon #Syria pic.twitter.com/KOz4mjW1rd

The #buypens movement began when a photograph snapped by Gissur Simonarson, the founder of Conflicts, a news website dedicated to reporting on the various conflicts happening across the world, tweeted a now-famous photograph that instantly went viral on social media. After receiving endless messages from people looking to help support the man and his family, Simonarson set out on a mission to locate the pen-seller.Upon successfully locating the man and his family, Simonarson launched a fundraising campaign on indiegogo.com titled, "Help Abdul and Reem start a new life" with the goal of receiving $5,000 in donations from those seeking to help support the single father of two. The campaign achieved its goal in under 30 minutes.

The fundraising campaign which has now raised nearly $140,00 in under 3 days, assures that the money will be securely transferred directly to Abdul and his family.
Advertisement
Subscribe for our daily newsletter